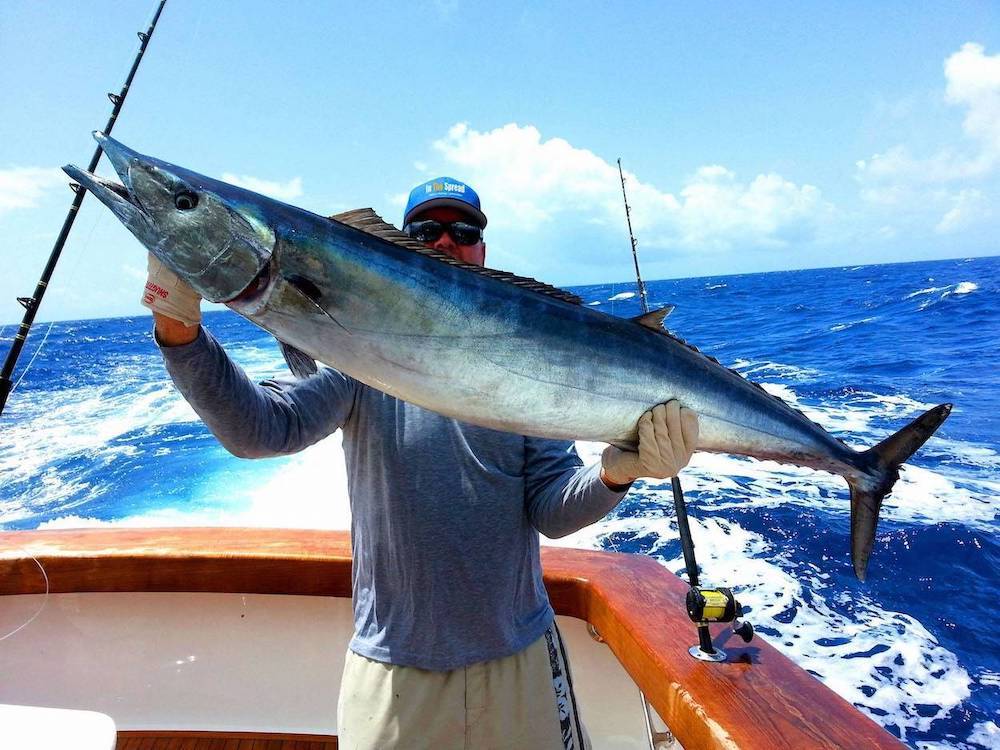 Wahoo fish, the majestic oceanic marauders with the temperament of a ruthless killer with its slashing attack and beautiful iridescent blue and silver torpedo shaped body has probably sent more rigs to Davey Jones locker than any other pelagic species. Targeting wahoo is serious business, requiring some very specific rigging. Many times wahoo fishing is a time consuming expensive proposition. We take on the challenge for obvious reasons. The sporting nature of the catch and how damn good wahoo tastes.The Hawaiian name for wahoo fish is Ono, which means delicious and delicious they are. If you want to feast on this tasty fish, prepare to account for their blood thirsty instincts.

As a scombrid fish, wahoo are closely akin mackerel, tuna and bonito. As a group, these fish are members of the good eats family. These fish are open ocean predators, with the wahoo clearly being the most vicious in the bunch. With stream lined bodies and retractable fins, wahoo are able to reach considerable speed in the pursuit of food. Recreational and longline catches suggest this species is distributed throughout the worldwide tropical and subtropical waters of the Pacific, Atlantic and Indian Oceans, including the Caribbean and Mediterranean seas year-round. Catches occur in higher latitudes during the summer as water in northern sections of the Pacific and Atlantic oceans warm.

Wahoo, tuna and mackerel all have a rather similar tail section. These are fish built to move fast and over long stretches. If you are going to constantly be on the move, you need to eat. As a super aggressive predator, the wahoo fish is primarily piscivorous. That means it mainly feeds on a variety of schooling fishes. Stuff like frigate mackerel, scad, butterfish, porcupine fish, and round herring are favorites of wahoo. Stomach contents also reveal an affinity for pelagic squids and other invertebrates. This is a fish with a ravenous appetite. Bigger wahoo are known to feed on small tuna, bonita and hardtails. When you find concentrations of bait in blue water, you can bet the wahoo are in the vicinity.

Even though you will have resident fish in any given fishery, a great number of fish move as ocean temperatures change and shoals of baitfish migrate. A wahoo's metabolism is such that they have to constantly eat and if you have to eat, you have to stay near the food. Wahoo migratory patterns which are strongly associated with the movement of bait schools. This is why a fish that is not known as a schooling fish will aggregate in schools as large as 100 or more around structure like banks, pinnacles, reef edges, buoys and flotsam. The wahoo are there because baitfish will always seek the protection of structure.

Wahoo grow fast, reaching sexual maturity early, within the first year. By that time males are reaching about 2.8 feet in length and females 3.3 feet. You can see the feed bag is on early. A highly fecund species, wahoo are multiple batch spawners throughout the spawning season. Fish will release a half-million to multiple tens of millions eggs per year to compensate for a high mortality rate for eggs. This fast-growing species has a short life span of approximately 5 or 6 years. It is there high reproductive growth rate that allows them to flourish without the threat of being overfished. In a short time, wahoo can reach up to 8 feet and 150 pounds, though they are commonly between 3.5 and 5.5 feet long. The IGFA All-Tackle world record wahoo was 184 lbs. Commercial fishing reports suggest fish well over 200 lbs are regularly caught. A 150-200 lb wahoo is a serious fish to wrangle.

There is nothing like a wahoo bite. You have never heard a reel scream like when a big hoo slams your high speed trolling bait going away. The bites come fast and furious. As fast as the bites come, they disappear. Wahoo fish are savvy in their finickiness. The fish seem to figure out pretty quickly what is happening and stop biting. The more versatility you can throw at them the better the results. If you are high speed trolling and hook up, cast a jig way out and crank like hell. Many times you will pick up a bite from another fish on the scene. This is fast action fishing. The techniques, the pace, the bite, the blistering runs all make the sporting quality of wahoo fishing primo.

The trickiest part of How to Catch Wahoo is narrowing down the technique you want to use. You can troll, jig, use fishing planers or bait fish, you can even kite fish for wahoo. When trying to locate areas where you may find wahoo, it is a good rule to remember that the vast majority of the time, wahoo will be found and caught in blue water. Look for temperature breaks. You can usually visualize this as a change in water color. This will be area where two or more ocean currents are converging in a rip line. Many times you will see an area of turbulence in the water, as if am isloated stream is flowing in the middle of the ocean. Calm water next to choppy water. If these color or temperature breaks can be correlated to a weedline, a seamount, an edge or some other type of structure, this is absolute dynamite. Definitely spend some time fishing this area.

High speed trolling for wahoo is probably the most common fishing techniques. If you want to learn more about high speed trolling for wahoo, watch our collections of wahoo fishing videos. Trolling is great for covering lots of ground. If there is a large expanse of reef edge, trolling along the edge is ideal. You will want to meander close to the edge and then back out into deep water sweeping your lures over the edge and then out into the deep in an elongated snake like pattern. You will want to run at speeds between 8-20 knots with 14-16 knots seemingly being a sweet spot. Skirted lures, Japanese feathers, a combination thereof and Ilanders rigged with wire leaders and weighted do very well. If you want to get an upclose demonstration on rigging wahoo lures, check out our instructional video. Lipped plugs are another excellent choice to trolling. You will be running at much slower speeds, but the lip gets the lures down to where the wahoo suspend and the lures action really triggers strikes. Rapala, Yozuri and Halco all make superb lipped or bibbed lures.

In limited studies, wahoo have demonstrated a propensity for spending time at depths of 250-300 feet. So, if you are not getting bites near the surface, get your presentations down in the water column. Jigs are a great way to get a presentation down deep quickly. When you encounter surface debris, weedlines or flotsam, it is good to make a few passes trolling baits, but if you get no bites, send some jigs down and see if you can trigger strikes. Oil platforms make for excellent structure to jig around. Another productive tactic to use when trolling is to cast a jig way out after you hook a fish with one of your trolled baits and crank it in fast. This will garner bites from other wahoo in the area. As a rule, you should have an assortment of Shimano butterfly jigs, Raider jigs and Salas jigs. Light colors work well on bright days and darker colors on more overcast days.

Bait fishing is another effective way to catch wahoo. Blue runners, scad or goggle eyes, frigate mackerel, threadfin, ballyhoo, croaker, sardines and pinfish are some of the better options for wahoo baits. A good method is to slow troll live baits with cigar sinkers or a downrigger, bumping your boat in and out of gear around flotsam and structure. There are a lot of ways to rig live baits. The thing you need to consider is the way wahoo fish attack. With a bait presentation, wahoo will come in from the side with a slashing side attack that leaves the prey sliced on half. For this reason, a stinger rig can prove helpful. Light wire rigs where you have a live bait hook and a stinger make great bait rigs. Place your live bait hook just in front of the dorsal fin. The stinger will be a smaller treble hook, a trailer, positioned closer to the rear of the bait, behind the dorsal, will do the trick.

It may appear as though there is a wahoo season in any fishery where the fish is regularly caught, but is that really the case. There is an argument that can be made that the wahoo fish are always there, just in different concentrations. Several top wahoo fishermen I have spoken with say that can catch wahoo all year, if they so desired. The mitigating factors are weather and the abundance of other migratory pelagic species like tuna. In many cases, there will be resident fish and transient fish. Some wahoo fish will migrate with the changing water temperature and the related movement of baitfish. Warmer water finds the fish moving northwards and cooling waters finds them moving to the south. Even though studies have shown wahoo spend more than 90 % of their time in water between 65 and 80 °F, larger number of fish and big wahoo are caught during the January-February period in the Gulf of Mexico, when water temperatures are lower. In the Gulf though, you have a lot of factors at play. You have nutrients dumping out of the Mississippi River and phenomenal structure, both natural and manmade. So, if you target wahoo in earnest throughout the year, you will probably catch them.

Without a doubt, wahoo has to be at the top of the list for tasty fish. After all, the Hawaiian name for wahoo means delicious. In most culture that utilize wahoo in their cuisine, wahoo meat is highly regarded as a delicacy. The fishes texture is firm, flaky and delicate with a mild sweet flavor. The flesh is a beautiful white color and remains white when cooked.

You should eat it quickly after taking a fish, as it does not store well. Cooking preparations range from grilled, broiled, blackened, sautéed, poached or batter fried tempura style. Wahoo does have a low fat content, so keep that in mind when cooking this fish, so the flesh does not dry out. Raw in various sushi presentations is supreme. When you think about sushi and the raw fish used for it, wahoo is not usually at the top of the list. It should be. This may be the best way to experience the wonderful texture and taste.