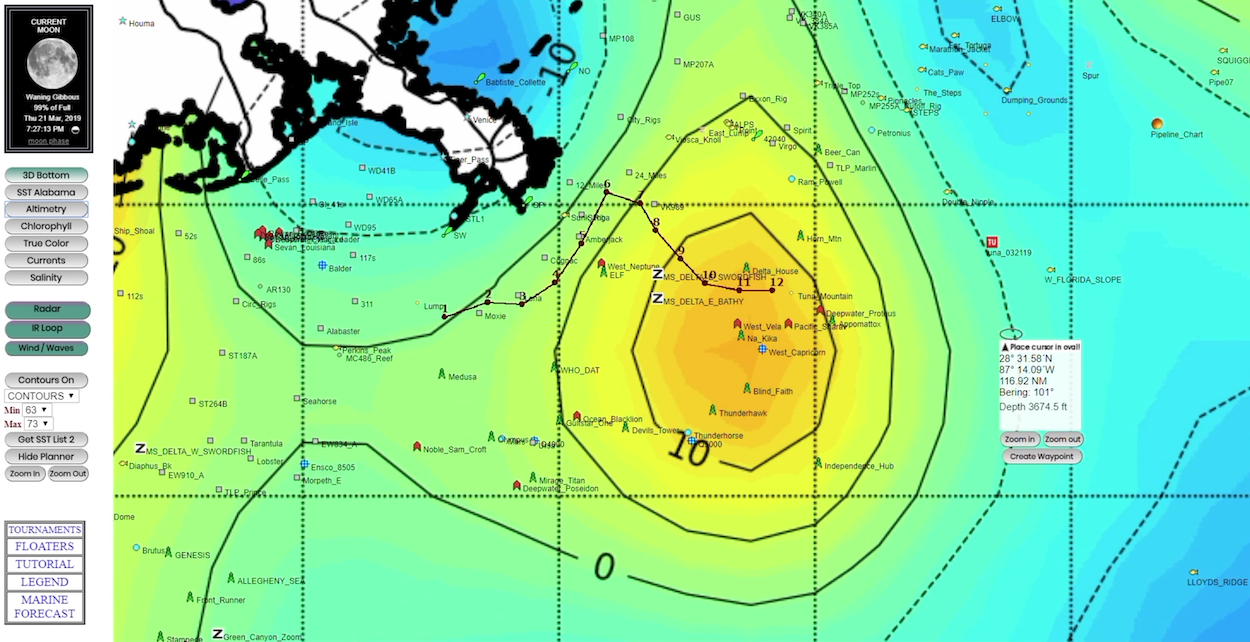 Altimetry Fishing | In The Spread

Altimetry fishing is really all about fishing an area of upwelling. An upwelling is simply an upward moving current. Altimetry charts are graphic readings from satellite services that measure the height of the ocean surface. You can areas where the ocean surface is higher, which is an upwelling, or where it is lower, which would be a downwelling. Smart fishermen use a variety of satellite based fishing services to determine where they should focus their fishing efforts. If you can zero in on productive areas and eliminate unproductive areas, you are saving time and money, as well as putting yourself in a better position to catch the species you are after.

The basic building blocks of life in the ocean begins at the microscopic level. Members of the plankton community make up that foundation. Small fish feed on this plankton, which attract more and bigger fish. Thus the food chain begins. Plankton are marine drifters moved along by ocean currents. When you have water being forced to the surface, you will have the food chain at or very near the surface. This will attract shoals of smaller bait fish, which in turn will draw tuna and dolphin. When these guys are on scene, there is a good chance marlin will be in the vicinity to feed.

The waters in the oceans are moved around by the rotation of the planet. There are a number primary currents and counter currents that lay the foundation for how life in the oceans get transported. Ocean currents are the conveyor belt of nutrients and life building elements that create oceanic food chains. In areas where you have abundant life, you will have better fishing. An area where water is being pushed up to the surface is called an upwelling and an area where water is being pushed down is called a downwelling. Water moving up brings life with it. You want to find upward pushing currents. This is where you will find move life and better fishing.

This is the same for every area of the ocean. You will find prevailing currents. These highways of water collide with the continents of mid-ocean volcanic structure and are forced in various directions. When this happens, you get water moving up, down or sideways in the water column. For altimetry fishing, we are only concerned with the up and down movements. If water is being forced down from the surface, then the food chain in going to be pushed down and the resulting fishing will not be good. Without the food, the bigger fish move.

If you consider the Gulf of Mexico, there are a number of dynamics at play that can be taken advantage of, when it comes to fishing. Now, these dynamics are ever changing. Here is a basic breakdown of what is happening. The water of the Atlantic Ocean rotates in a clockwise manner above the equator. At the equator, you have an equatorial current that drives east to west colliding with the north east side of South America. This equatorial current forces huge volumes of water into the Caribbean basin and up past Mexico, as it pinches through the Yucatan Channel. This volume of water pours into the Gulf of Mexico where it smashed into the water dumping out of the Mississippi River forming the Loop current. There are multiple gigantic gyres or eddies that form from the creation of the Loop. When you factor in the incredible bottom structure of the Gulf, these currents will create all sorts of evolving side currents. Water can be forced up or down depending on the forces at play in the Gulf. The upward and downward movement of water can be measured from satellites and then charted over time, giving fishermen unique insight. You will need to factor in other variables to determine whether an area of upwelling is worth exploring, but all the information is out there to make excellent judgement calls.

So, as a fisherman, how do you find these areas of upwelling. There are several satellite charting services that provide SST or sea surface temperature information, altimetry readings and chlorophyll data. Marlin in the Gulf will typically be caught in waters where the SST is within a very given range. Chlorophyll readings tell you the amount of plankton in the water. If you can correlate areas of good altimetry readings with ideal sea surface temperatures and chlorophyll, then will know where you should go. If you are a tournament fishing, where time is limited, knowing this information will be invaluable. Getting into productive waters quickly eliminates a lot of uncertainty. There are no guarantees, but the more you know, the better your chances of boating a nice fish.

For more details on how to read altimetry fishing charts, check out our free video, How Altimetry Charts Work, featuring Thomas Hilton, of Hilton's Offshore satellite services. He provides a unique perspective on how to use the data to catch more fish.