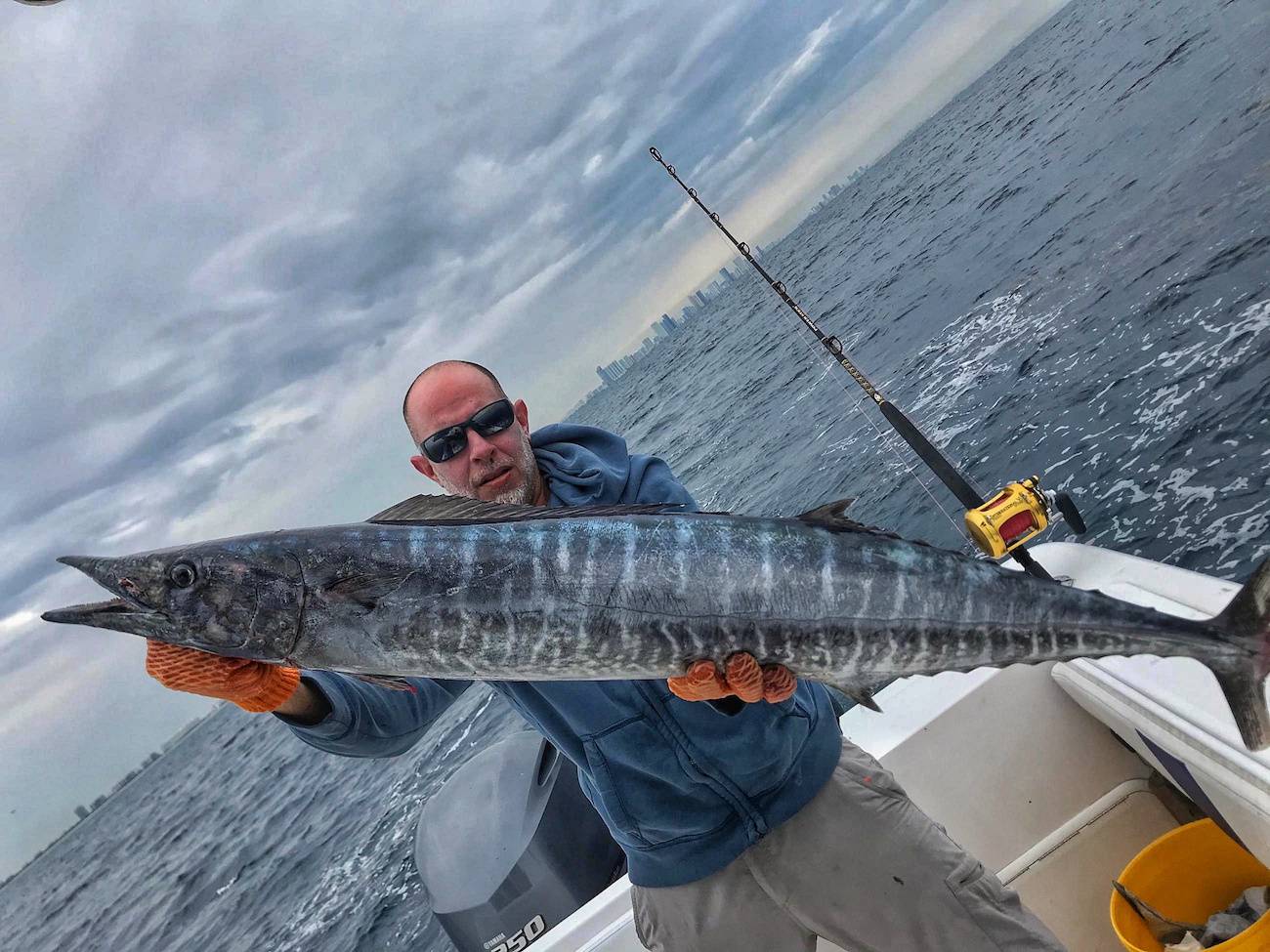 One of the main driving factors behind the creation of In The Spread was to examine in detail the movements of fish. Why they move and where they move. In the absence of scientific data sets that lay out behavioral tendencies of a given species, the best place to turn for information is to fishermen who target that species on a regular basis. The longer a fisherman has been pursuing a fish, the more knowledge they have to draw from. I am talking about really heady fishermen. My proclivity is to gravitate towards fishy people that think on a deeper level. I always want to pick the brains of super interesting folks. Knowing what is going on in the ocean that drives fish to do what they do is key. There are building blocks in the ocean that create the basis for the food chain. To varying degrees, pelagic species follow the food. They tend to orient themselves in areas where food is abundant. One particular species where there is little known about their patterns is the wahoo. Watch wahoo fishing videos https://inthespread.com/wahoo-fishing-videos

Wahoo fishing is addicting? They are not so easy to catch. It can be a damn tricky fish, that's for sure. There one minute and gone the next. It's the science of fine tuning wahoo trolling spreads, explosive drag burning runs, the loveliness of the meat on the pan or grill that excites. I love it. How this finicky pelagic species moves still confounds the best minds. Most information is speculative. Where to fish? When to fish? What are they eating? How to entice? When there exist an absence of raw data, turn to folks that are wise in the ways of the water.

Just think about how many ways there are to target this member of the scombrid family? High speed trolling, slow trolling dead baits or lures, trolling live bait, jigging, fishing planers and kites all work well. What is the ideal wahoo trolling spread? What kind of baits do they commonly eat? Herring, squid, small skipjack, menhaden, bonitos and hardtails are some of the usual suspects found in wahoo stomach contents. What water temperatures, tides, moon phase are better? An ever changing set of criteria. The fishermen that have spent years analyzing techniques and the conditions in the water when wahoo are around know a bit more. Those are the fishermen to talk to.

The fundamental questions that I wanted to ask a few excellent wahoo fishermen are when and why are wahoo showing up. Also, the voluminous discussion on wahoo tackle, big boat versus small boat wahoo trolling spread setup, bait and lure rigging, boat driving is for another article or a long video like our High Speed Trolling for Wahoo. What I am doing here is postulating on the movements of wahoo and trying to break out whether big wahoo move independently of smaller, more resident fish.

Even though wahoo are thought to be migratory, little is known about their migration patterns. There is not a lot of scientific data to pull from. You do see seasonal variations in catches within specific regions like the Gulf of Mexico, the Bahamas, S, Florida, N. Florida, North Carolina and Bermuda. Where are they coming from and where are they going?

Do wahoo move with the currents and the changing temperatures of the ocean? Do big wahoo move independently? What roll do migrating bait fish schools play in the movement patterns of wahoo? Are there resident fish populations? Do wahoo migrate like many other pelagic gamefish? Or, are higher catch rates just an off shoot of the pressure being applied to the fishery during specific times of the year. Many fishermen will shift focus to more productive species like dolphin or tuna when the fish push through and this could be a skew. The wahoo could still be there.

So, when trying to correlate bite patterns, water temperatures, currents, bait migrations and spawns, when big fish bite more, who better to turn to for insights on wahoo movements than a few guys that are held in high regard when it comes to catching wahoo in the Western Atlantic, Greater Antilles and the Gulf of Mexico. North Carolina, the Bahamas and Louisiana are my areas of interest for this article. The northern Gulf is a bit more of an anomaly with all the artificial structure. Numerous oil platforms support super active micro-ecosystems that hold tons of life year round. This dynamic runs counter to other places where there seems to exist a more regular seasonal pattern to catches and may account for a solid year round fishery. There are consistencies though.

With worldwide distribution in tropical waters, wahoo are an abundant, fast breeding species with a relatively short life span of about 9 years. Reaching sexual maturity in the first year, wahoo experience multiple spawns each year, dropping upwards of a million eggs per spawn.

Wahoo appear to be present year-round throughout much of the Caribbean and Gulf of Mexico, although its abundance appears to have a seasonal pattern. Capt. Will Wall, of Venice, Louisiana, speculates that less effort is put towards catching wahoo when the tuna bite heats up. Thus, less fish being caught and the appearance of a season emerges. He catches wahoo throughout the year and maintains there is no pattern to when big wahoo are caught.

Further north in the Atlantic some wahoo appear to be present year-round, but abundance is far more seasonal, with the fish arriving as water temp warms up. For example, in Bermuda, wahoo is taken year-round, but catches have a strong seasonal pattern with the majority of landings consistently occurring in the April thru September.

The question remains, do wahoo migrate throughout the Atlantic? Is there a size bias to fish that migrate or when they show up? It makes sense that the bigger the wahoo the more it needs to eat and thus more of a likelihood that the fish would follow bait schools moving around the Atlantic basin. The smaller fish may make up resident populations. Without solid scientific data, we just don't know. We have to go on experience.

Wahoo are savage predators that move with blinding speed, attacking prey with indiscretion. They are fish predators. They eats lots of other finfish. Predation amongst wahoo fish is such that they will group according to size, for fear of getting eaten by a larger cousin. Overall, 90% of their diet is made up of finfish and the remainder being mostly squid. Finfish follow squid, which follows plankton. The conveyor belt. Wahoo are known to forage on mackerels, skipjack, bonito, menhaden, hardtails and of course squid, which do move with currents. The most important fish in their diet though are other members of the tuna family. Dialing in when these baitfish and small tunas move through your waters is going to be a good barometer for when you will catch more fish.

By examining the stomach contents of wahoo over several years, you will see consistencies in the the types of forage fish they are consuming. Marty Hiatt, of Morehead City, North Carolina, says he routinely finds squid, small skipjack and speedos in his fish. Will Wall finds pogies, bonito and hardtail in his fish that come out of the Gulf of Mexico. Both fishermen say follow the bait.

Given the way wahoo group themselves by size, it would be interesting if you could correlate bait school movements and big wahoo catches. Big fish come for the food. You would think that it would take a bigger fish to eat a bonito. The damn tricky part of what wahoo eat run the gamit, at times. The size and color of what they eat can be totally random. You think you have them figured out and boom. No more fish. What happened, where did they go?

The changing water temperatures brought on by seasonal currents bring the bait. For Will Wall, water temperatures in the mid 60's are best for wahoo fishing in the Gulf of Mexico. His advice is to pay attention to the moon when the sea temp gets right. Fishing periods of bigger gravitational movements are beneficial. Clean pretty water is a must for Will. Marty Hiatt finds the best fishing when Atlantic waters are 72 degrees in the Spring and 74-76 degrees in the Fall. For Marty, he looks for cooler edges around known structure.

It is possible that wahoo instinctively follow a stable migratory route in the Atlantic, gathering at seasonal feeding areas on the way, as has been postulated for yellowfin tuna and blackfin tuna. This route would be a sequential movement north through the waters of the Caribbean, Gulf of Mexico and Western Atlantic, with a return migration south via the waters of the eastern Atlantic. It's all about the right water temperature colliding with structure. This is a conveyor belt of food that never stops moving. You have to find the right food, to find the wahoo.

There are a lot of variables that go into wahoo fishing. Learn the sea temperatures that wahoo are abundant in and the roll changing water temp plays in your catches. Look for big moons and see if the major and minor lunar phases are productive. If you experience seasonal variations in the catches of bigger fish, I would love to know more. Correlating all these points of data and then introducing the right gear will put more wahoo in your boat.

After all my conversations, its hard to really now this fish. Everyone has a little different opinion. The whims of the ocean turn fish on and off. The best we can do is fish. The wahoo are out there.