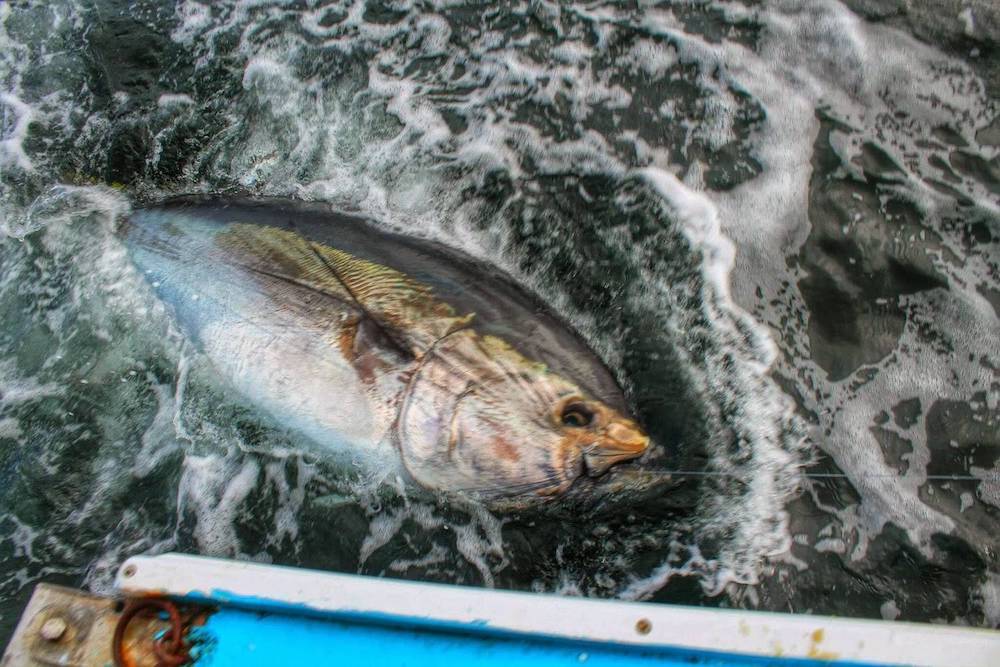 There is a lot of variance in the hooks used for tuna fishing. The one commonality amongst all the different brands relates to hook size. No matter the size of tuna you are fishing for, the hooks are all small, very small relative to the power of these fish. From bluefin tuna in Nova Scotia to yellowfin tuna in the Bahamas and the Gulf of Mexico, hook size matters.

Yellowfin, bluefin, bigeye and smaller tuna species are all tremendous predators from the moment they hatch. Their constant movement begets a high metabolism. In turn, tuna have voracious appetites. This has them constantly on the stalk seeking out schools of fish like herring, mackerel, and even eels.

Tuna are sight hunters who possess acute vision to the extreme. It is said that tuna have the sharpest vision of any bony fish. This type of sight allows it to accurately identify a fish it wants to eat and efficiently catch it. The superior vision of tuna may also allow it to accurately gauge the distance to its prey, making it an efficiently lethal predator. The ability to spot its prey by sight and then hunt it down with precision works to a fisherman's disadvantage.

Great eyesight and strong instincts make tuna leery of anything not completely natural. This equates to tuna displaying extravagant hook shyness. These fish can be discerning to the point of ignoring hooked baits in the midst of a feeding frenzy. You really want to be able to hide the hook in the bait, so the tuna cannot see it. This is where the right small hook serves you well.

The sporting prowess of tuna necessitates a strong wire hook. Even small tuna can pour heat on your tackle. If your hooks are not up to the task, there is the chance of losing a fish to hook failure. The best advice I can offer is to always use quality hooks when tuna fishing. Let's look at a couple of different tuna species and hooks that work well for each.

The bluefin tuna is the king kong of all tuna species, possessing ample size, speed, power to test the limitations of even the most robust hooks. Giant bluefin tuna get well over 1,000 pounds and pull harder than probably any other fish in the oceans. You would think that such a big powerful fish would require a big beefy hook. Nothing could be further from the truth. You have to do everything possible to hide the hook from these bruisers. If there is any part of the hook showing, you might find yourself with a skunk.

A proven bluefin tuna hook is the Gamakatsu heavy duty live bait circle hook in 11/0 and 12/0. This super stout hook is a little bigger than a quarter. That is not very big hook, in appearance, for a fish that exerts the kind of pressure the bluefin tuna does. It is, however, one that will not fail you.

For the ever popular yellowfin tuna, the size of your fish varies based on fishery. In the eastern Atlantic the average size fish is smaller that those caught in the northern Gulf of Mexico. For example, in the Bahamas, which has a well establish yellowfin tuna fishery, the average fish is under 50 lbs. The Gulf fishery, especially out of Louisiana, fish easily exceed 100 lbs and range up to 200.

Just like the bluefin tuna, yellowfin are particular about how they feed and will steer clear of baits with exposed hooks. You need to do your best to hide the hooks in the baits, unless the fish are feeding at a frantic pace. Then you can get away with some exposed hook, but it is best to try a bury it in the bait.

In both the Bahamas and the Gulf, you will need to use small circle hooks. To gauge the difference in tuna hooks being used, I sampled groups of well known successful tuna fishermen to see what each used in the respective fishery.

The guys in the Bahamas commonly use baits that are not overly large. Since the yellowfin tuna are not that large, the hooks trend on the smaller size. Owner 5363 mutu 2/0, 3/0 or 4/0 for dead bait and live bait are the norm, when dealing with fish under 50 lbs. It is rare to catch 100 lb fish in the islands.

Louisiana is a different ball game. Here you will experience plenty of good sized fish. The crews there will use as big a hook as they can get away with. Tuna hook size is largely driven by bait size. The baits being used vary in size, based upon the season. The yellowfin tuna hooks used range from 6/0 up to 10/0, depending on the size of fish around and the bait size being used. The Mustad 39950 gets used a great deal. With bigger fish over 100 lbs, crews will use 7/0-10/0. For smaller fish under 100 lbs, 6/0 and 7/0 are utilized. It doesn't matter whether you are using dead bait or live bait, bigger baits means bigger hooks. When you are targeting larger trophy sized yellowfin tuna, over a 100 lbs., the baits used will be bigger.

Learn more about yellowfin tuna fishing in the Bahamas and Louisiana.