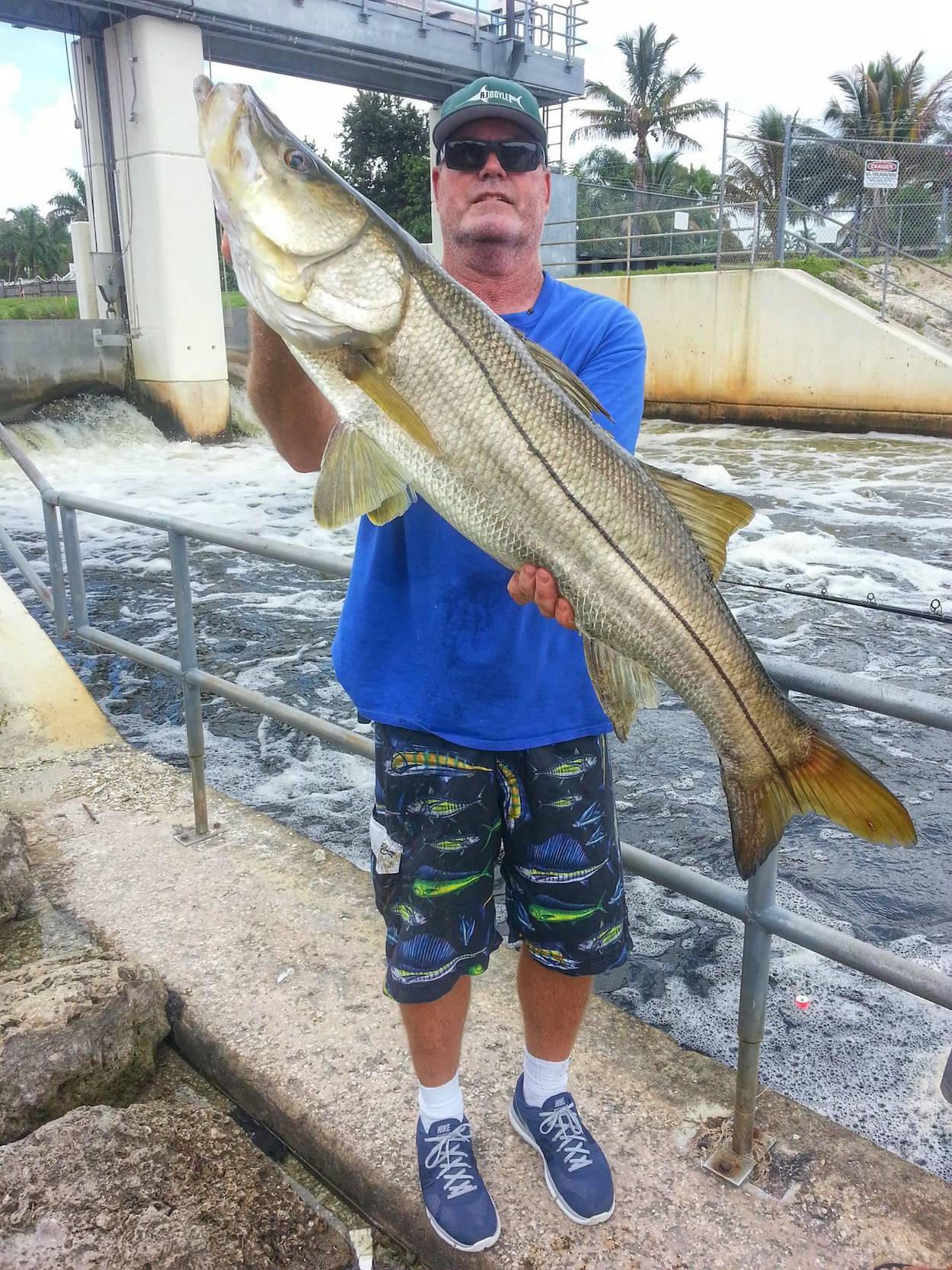 Fishing spillways provide ample opportunity for any curious angler to tangle with some really large fish. In south Florida, the real prize is giant snook. What is it about spillways that make them such interesting fishing spots? Well, you have two core fundamentals of good fishing at play which are structure and moving water. A spillway is a giant concrete structure with lots of rip rap on both sides to control erosion. What they do is control the flow of water from the freshwater lakes and swamps into canals that move water out to the ocean. When the heavy rains come to tropical south Florida, spillways help prevent flooding.

Spillways in Florida were created as part of the U.S. Army Corps of Engineers massive flood control plumbing system stretching from just south of Orlando to Florida Bay. The original idea behind this plan was to develop and protect the sought after agricultural lands of south Florida during the late 1800's through the mid-1950s. Today there are over 2000 miles of canals and associated locks/water control gates or spillways draining precious fresh water off of South Florida and out into the ocean. Not only do the spillways manage flood waters, they also prevent saltwater intrusion into the agricultural areas.

The unintended by-product of this massive water management program was the creation of super dynamic fish aggregators. Spillways are essentially inland FAD's for freshwater and saltwater species. When you look at how fish behave in any system where there is a flow control like a dam or a control gate, fish will swim all the way up to the point at which they can go no further, that being the massive structure that controls the release of water.

Most anywhere you find structure, especially massive structure, and moving water, you will find life. All fish relate to structure of some kind. Another component that draws fish is the vibration of moving water as it collides with structure. On one side of the spill, you have a suction force where water is being pulled from the freshwater source. On the other side you have a large quantity of water dumping into otherwise calm water. Current is created on both sides, periodically. Even though the release of water is periodically periodic, fish have been conditioned to move close to the spillway for a feast. What does periodically periodic mean? Well, a spillway only releases water when levels reach a certain point. This does not necessarily happen on a set schedule. In the rainy season, the release schedule will be more frequent than in the drier parts of the year. So, water will be released more heavily during specific times of the year.

Let's breakdown what fundamentally makes fishing spillways so interesting. There are several intense forces at play. You have both suction and expulsion happening to create a conveyor belt of food. As I have mentioned, the point of structure that is the spillway acts as a choke point. As water levels rise, water will need to be released, so the control gates will open. As the gates open, a suction force is created that pulls nutrients towards the spillway structure. When the gates close all this nutrients settles. As more and more nutrients builds up on the banks and manmade structure, more life aggregates. Largemouth bass are attracted to the reservoir above the spill to feast on smaller fish that are foraging on the nutrients and other life that build up. Below the spill, where the real magic happens, giant snook push up to feast on the fish that are sucked through the gates. As freshwater fish spill into the basin below the spillway, the force of the crashing water stuns those fish, as well as pushes fish living in the basin off there points of protection. All of this creates a veritable smorgasbord for predators like snook. The snook just lay back in the slack water and slam disoriented fish.

Diving further into the dynamics of the spillway, let's take a gander at some of the environmental building blocks that contribute to amazing fishing. All fish relate to structure. With spillways, you have lots of structure. When you add very healthy current to the mix, you will find lots of fish in the vicinity.

The volume of water that passes through a spillway generates tons of dissolved oxygen. Structure, current and ample amounts of rich oxygenated water combine to create one hell of a good fishing hole.

When water starts to pass through the spillway, the current created by the spilling water sucking more water along with it creates lots of vibration on the water system. Fish are drawn to this like dinner bell. Shad, bream, shiners, oscars, speckled perch, largemouth bass, channel catfish and crawfish are all drawn in. When the water level reaches specific levels and the control gates open, the force of suction is too much for many fish and they cascade over the spill. This is shock and awe for these fish. As more and more fish pour into the brackish water of the basin, a conveyor belt of food attracts big hungry predators. Snook stack up to feast on all the stunned forage.

Where to Fish Spillways

Knowing full well that the conveyor belt of food pouring over the spill walls draws giant snook up channels to boils, it is our opportunity to capitalize on. Snook are ambush predators with excellent directional locating systems, their lateral lines, that enables them to find prey in pitch darkness. The prominently indicated black lateral stripe on each side is a sensory organ that enables them to detect even the most trivial vibrations in the water. Snook are one of the few species in the world that don't have to see their prey, they can feel it with their ultra sensitive lateral line. The dirty swirling water is all advantage for fat snook.

The key to fishing spillways for snook is to focus on eddies, where the current cuts back in the opposite direction creating cyclical slack current. That's where the shad and other baitfish will hang out, seeking shelter from all the raging current. In turn, this is where snook will set up. Fishing for snook right in the boils is not the best use of your bait and time. Find slack water along the bank edge or just below the boils where the water starts to calm. Drift baits in these areas. Giant snook do not want to put much work into snagging a meal. They will hold in a area and wait for food to come into close proximity, so they can pounce with minimal effort and lightning speed.

One word of advice is to be patient. Observe the entire down current layout. By doing your due diligence, you will be able to spot the areas that will be more productive. If you are fishing spillways from the bank, you have to advantage of drifting baits down current and holding them in ideal spots. If you have boated up to the spillway, you are relegated to holding position in moving water below the barriers. Most spillways have a cable with barrels stretched across them to keep boaters a safe distance from the gates. This is to keep boats from being swamped should the spillway open suddenly. You can't tie off to the cable. That's against the law and also dangerous. From your boat you can cast baits or lures upstream and work them back.

If you want to learn more about fishing spillways, have a watch of our Snook Fishing Florida Spillways video. You can easily apply what you learn in this fishing video to any spillway. Don't let the fact that we filmed this in Florida get in the way of learning some very important spillway fishing techniques.