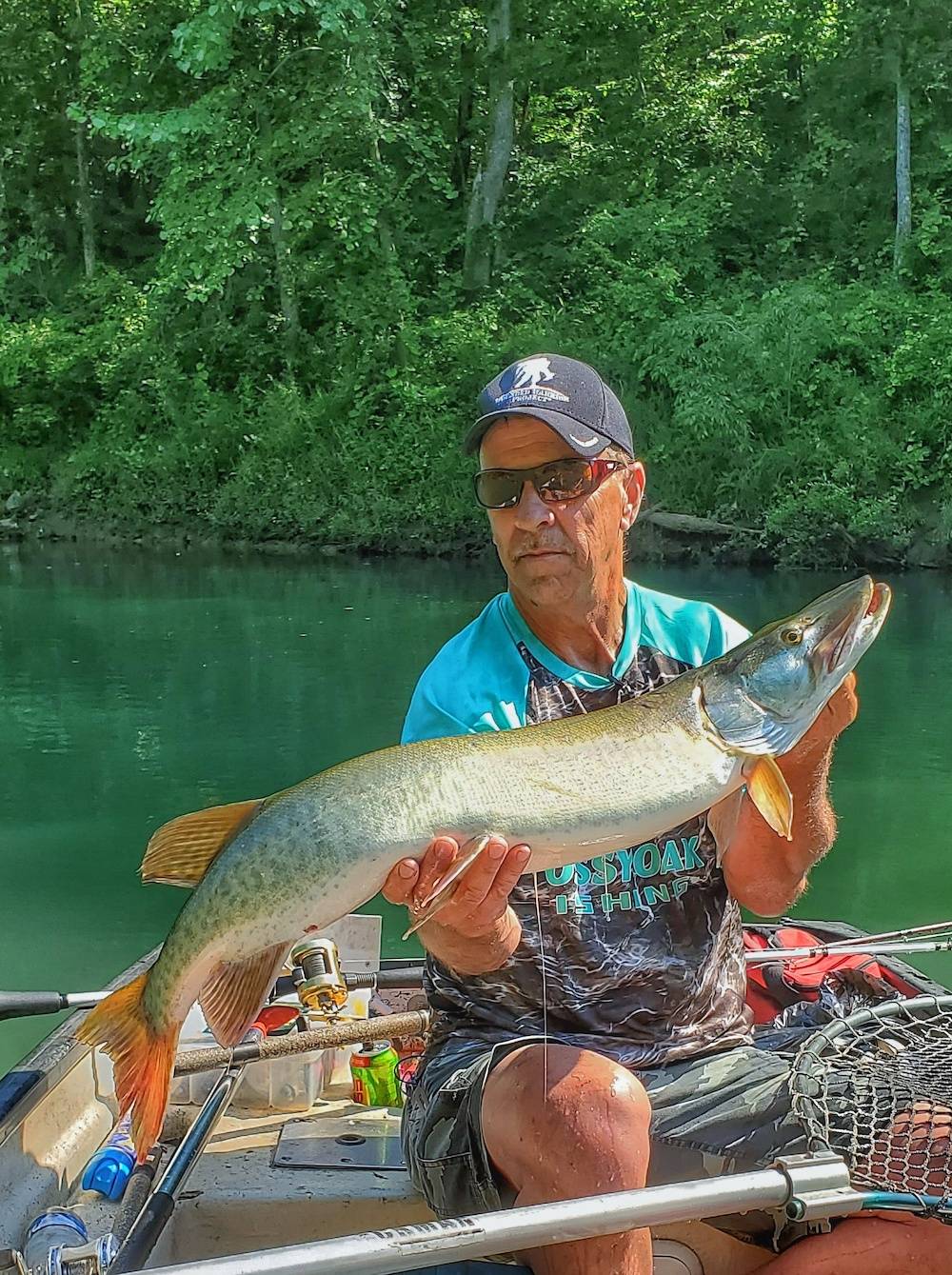 Located just outside the city limits of McMinnville, Tennessee, the Collins river winds it's way through the countryside of Warren county. The locals here have always know about the smallmouth bass and red eye (black) perch fishing but times have changed for this diverse little gem of a river.

The smallmouth bass are still plentiful throughout the Collins. Largemouth bass although not as numerous, grow large, considering the Collins river is mostly a shallow, cooler river system which is fed by numerous streams and springs. And, the Collins river is famous for big red eye perch which are a blast to catch on light tackle and quite tasty, pan fried, southern style.

The new kid on the block is the mighty Musky, which was re-introduced back around the late 1970s into the upper regions of the river. Collins river musky were once a natural part of the water system, which runs along the base of the Cumberland plateau, on the highland rim in middle Tennessee. In 1917, the Tennessee Valley Authority completed construction of the dam at great falls in Rock Island Tennessee. It is thought that muskie spawning habitats were altered to the point that they slowly died out in the Collins river over the next few decades. By the time muskie were re-introduced back into the Collins, there was at least a 30 year period where few, to no muskie existed in the Collins.

To say that the stocking effort by the state of Tennessee was a success is an understatement. Within 10 years after the first muskie fingerlings were stocked the fishing was simply amazing. Fish were already hitting the 50 inch mark and the Collins river soon became the talk of the county. Some locals scoffed at the stocking effort, claiming them musky fish "are eatin all the perch"! The sport of musky fishing in a smallmouth river did not explode overnight. It took some time. But, stocking efforts continued through the 80's and 90's. The last muskie fingerlings stocked in the Collins river was about 2012. A two year study, conducted by Tennessee Tech university concluded that musky reproduction was occurring at a rate that could sustain the population without further stocking needed. Yearly data provides proof that the fishery is indeed healthy.

The reason for the success is simple. If river musky once thrived in the Collins, put river musky back in. That's exactly what the T.W.R.A did. The proper name for river musky is the Ohionisisis strain which once roamed many Tennessee streams and rivers. The rest, as they say is history. I might add that not only has the Collins river thrived, the entire great Falls system has good muskie populations in the Caney Fork, Rocky and Calf Killer rivers. Wintertime means fishing for giants in any of the four rivers mentioned.

Muskie fishing the "skinny" can be exciting and challenging in the clear, limestone upper half of the Collins river. Winter months are the best months to bag a trophy fish. November through May is the best times to fish. Muskie feed heavily in the fall and early winter, but even the coldest winter months offer fantastic opportunities for big fish. The Collins river water level generally is higher in the winter months, offering easier navigation for smaller boats. Whether it's a short or long float trip you are after, check local weather and water conditions. You'll need two vehicles for point A to B float trips.

In the so called "new normal" world, people are looking for alternative adventures that are closer to home. When it comes to trophy musky and smallmouth bass fishing, the Collins river, and all of the rivers of the Great Falls watershed offers the perfect getaway trip. With the exception of July and August, and the hot summer water temperatures, Collins River musky fishing is a year around sport. So, when planning your next muskie adventure, consider going south where hot action can be found in the cooler waters of the Collins river. Smallmouth, perch and big musky are waiting for someone to drop a rope down to em. Middle Tennessee, southern river fishing at it's best!