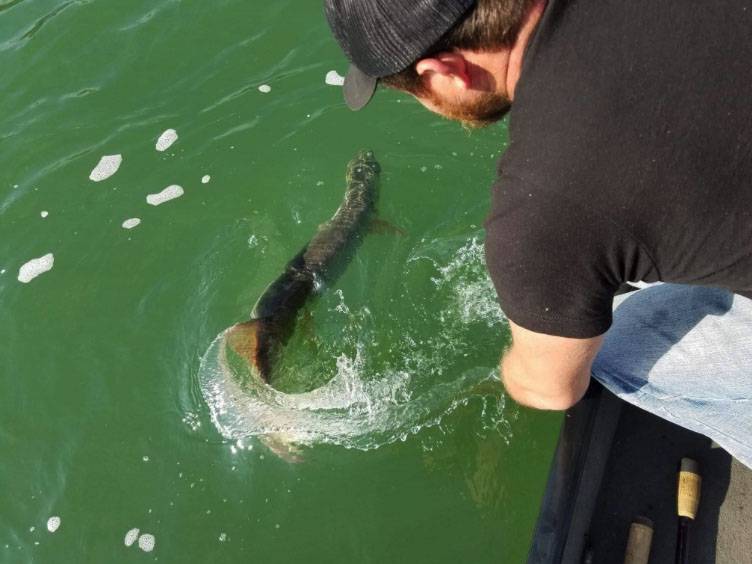 Big Muskie Fishing in the Winter | In The Spread

It’s that time of year once again.

The time when the year is new, and everyone makes their oh-so-resolute “resolutions”. Regardless of what you tell the man or woman in the mirror, the muskies, and particularly big muskie, are as always keen to stay true to their own yearly resolution, to pack on the pounds past the holidays and into spawning time.

While the fish are often “feeding” enough to bulk up the smaller males or blow up the big females that are now eating for thousands, the way they respond to many presentations, the larger fish especially, may have you thinking quite the opposite.

How are these fish getting so fat if they’re hardly sniffing letting alone engorging upon our musky-size table fare?

That’s because: they aren’t.

While muskies might be physically eating and putting on weight a lot right now, that doesn’t mean their physiology is demanding them eat big servings.

In fact, I’d often argue in many habitats, that evolution and physiology with larger fish determines they more or less lie on the couch and pop little morsels in their face as they come by, like a fat guy watching tv with a Sam’s Club sized bag of pizza rolls microwaved just an arm’s length away on the night stand.

As counter intuitive as it may seem, and while I’m a big absolutist to the phrase “their are no absolutes”, especially in the early season leading into the spawn, the largest fish in the system will be more likely caught on cross-training presentations for other species such as walleye and bass and yes, even crappie, than the usual chuck-and-wind high-dive belly flop slapping baits most guys throw, and even then their idea of downsizing is often 2-3 sizes yet too large.

We’re gonna be “hooking up” with a new line of rods called Toothtamer here soon, as they are currently en route, and the venerable proprietor Bill Green is about as genuine as they come. While we’ll be discussing the virtues of his incomparably equipped musky line of rods, we’ll also be looking over his walleye and bass stuff as well, not only because of my personal applications for them, but also that his secondary market rods are far better and better priced than many company’s best foot forward bass focused models.

Of particular interest to myself is his beefy yet tender musky spinning rod line, something overlooked by most manufacturers directly but they aren’t just inverted versions of his baitcasting line; they’re actually attuned and built to allow power and finesse needed to both utilize the strengths of the spinning rod presentation for muskies, the caveats being lighter baits demanding more articulate movements while not sacrificing the raw strength and load that it takes to actually land a giant musky once hooked.

That to boot, we’ll also be going into depth concerning some new baits to review that will be amongst some of the presentations on the musky bait size spectrum that actually will come in handy this spring, courtesy of the genius of Roger Watters at H20 tackle.