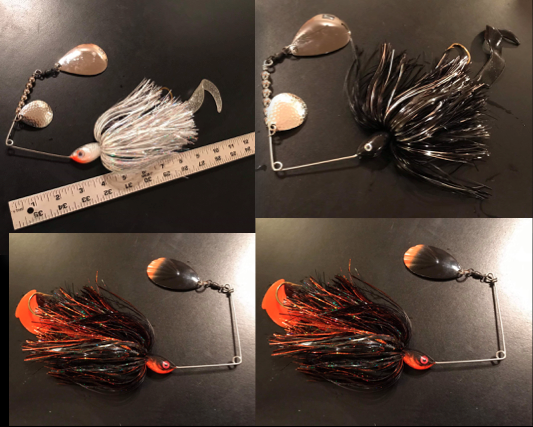 I often get on the pulpit and preach adamantly about the dangers of giving lure color too much credence, and to that I hold true, but often it seems in light of this I neglect to go into detail what elements should be focused on more, instead.

While I’m not saying lure color never plays it role (it absolutely does) what I am saying is too often I think our innate attentiveness to color makes us overlook other more crucial elements contributing to our success and failure.

There is probably not better way to quantify all of this down in a single category for dissection than by doing a laproscopic analysis of the safety pin style spinnerbait.

While too often the diversity is best expressed or at least noticed by creating a vast pallet of different hues and flash, the greatest asset to this particular tool is how easy it is to completely change the purpose by a simple recombinant of weight, blade sizes and arrangement, and component diameter all based off the same general design.

For instance, combining certain blades of differential resistance, such as a small Colorado and a larger willow, while functional at moderate to faster speeds, leaves a gap in slow control as the greater resistance cup of the smaller Colorado blade impedes the forces that allow the larger willow to engage, whereas two willows of variable size together work better in (wait for it) tandem.

Ironically though, it will be exactly that which triggers, as the lack of consistency makes the larger willow “stutter” when reduced to speeds that make it begin to stall.

As a rule, mixing the style of blades with differences in resistance, the further it is between the two styles, makes for a less versatile and controlled tool, when extremes of speed and weight are controlled.

A double willow spinner is a barn burner, but has little to no control on the fall. A double Colorado cannot handle the same speeds even under weight that double willows can, it they offer much more control on the fall. Taking it a step further, combining painted and non-painted blades also create varying degrees of resistance even between the same style blade and thus can cause “gaps” in function, which is why often using them juxtaposed can compromise the bait’s function in the effort to create an otherwise less influential color contrast.

Single blades offer their own strengths such as inherently less resistance but having a single resistance point also makes them less functional as yo-yoing tools like the double Colorado’s or fluted blades which tilt down at a 45 degree angle under proper weight before engaging. They simply sink straight down and thus lose some element of control.

However this single resistance point not only offers a more subtle stimulus required at times, but also makes the blade styles of less resistance burn faster and the ones of fresher resistance track slower. There are few things as effective as slow rolling a single Colorado along the bottom leaving a wake of silt in its stead, and nothing created this effect with less incidence of snagging than the safety pin style single blade.

While there are a handful of good companies that make musky certified safety pin spinnerbaits out there, I’ve used most of them and have yet to find an equal to the quality, function, and aesthetic attentiveness as Joe Murpny’s Spinners.

There simply isn’t a maker out there today who is half as OCD at his bench as Joe Murphy, and he literally lays down the law on every bait he puts his mind and hands to.

i strongly recommend if you are beginning to explore the often neglected world of safety pin style spinnerbaits for musky, you first check out his catalog of wares.

I've yet to see his equal.