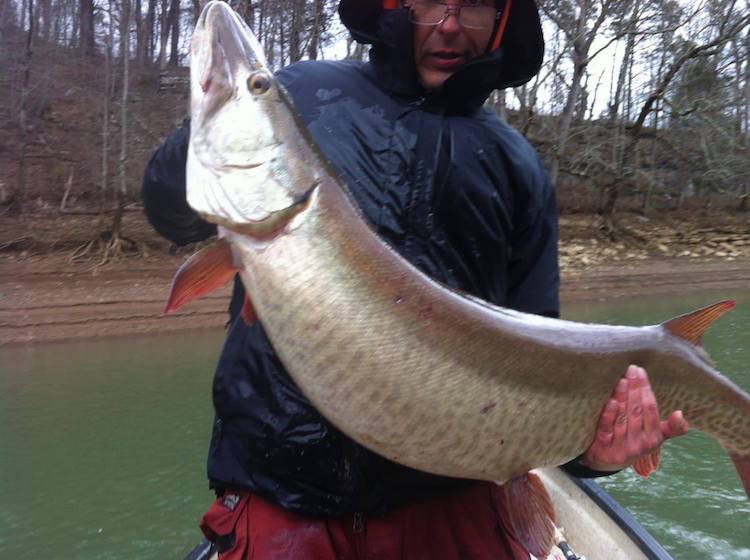 What's the best time to catch Trophy Musky in middle Tennessee? The answer is just about any month of the year. But to catch a giant fish, the late winter/early spring time frame is hands down the best time to get that fish of a lifetime! Just to come in contact with an egg filled, tummy filled fish of four feet or longer will give a man a fish story to tell and a memory to not soon be forgotten. Common names for such Muskies are Tank, Toad, Monster, beast, gator, missile, Submarine, Stud, slob.

My primary waters are Center Hill lake and Great Falls reservoir. Great falls is made up of four primary rivers: the Caney Fork, Rocky, Calfkiller and Collins rivers. Center Hill lake basically begins a few hundred yards below the dam in Rock Island state park. Center Hill is what I call a "bonus lake" and giants swim its waters! I say bonus lake because no stocking has ever occurred in Center Hill. Fish either pass over the Great Falls dam or through the pipes at the hydroelectric plant above the famous Blue Hole. Even better is the fact that there is strong indication that effective spawning is occurring in creeks and tributaries on the Hill.

The best time to fish? A nice two or three day warming trend always helps. Fishing pre front conditions and moon phases can also increase you odds. If I'm fishing post cold front conditions I usually go up in the "skinny" on the Collins river. Shallow river muskies seem to be less affected by cold fronts. I've had good success using gliders, suspending dive lures and twitch baits when water temps were in the upper 30's and low 40's. The key to success using gliders is slow down! Gliders with good hang time allows you to keep the lure in the strike zone longer. The 10 inch Manta has a great hang time and wide swing. It's an excellent cold water glider. The sidewinder by Deadhead Tackle is another big fish glider. And I always have a Hellhound glider ready. This lure has an easy walk the dog action and a nice wobble on the fall. The Hellhound has put more fish in my boat than any other glider.

It's a good idea to have a six inch twitch bait tied on as a throw back lure on a hot fish. I work these baits with a cadence of three cranks followed by a pause. This technique works well up on the upper parts of the Collins. Some of my best days on the water have come on cold, calm winter days fishing skinny water.

Let's get back to basic wintertime musky lures that you need to have in your arsenal. Soft rubber swim baits are outstanding just about any time of year, including cold winter months. Usually, lifting and lowering your rod tip to create the dying fish look is the norm. A slow steady retrieve is also very effective. There is really no way to fish a swim bait or soft paddle tail lure wrong. Another option is a jig/minnow combo which works well in the upper Collins River in the deeper winter holes. Do some bottom hopping with a jig/minnow combo and hold on!

Whether it's the Upper Collins, the Caney Fork river or the upper portion of Center Hill lake, the late winter/early spring time frame is the best time for that fish of a lifetime! Here in the south we do not have cabin fever. Dress warm, and fish on. Your giant is out there waiting!