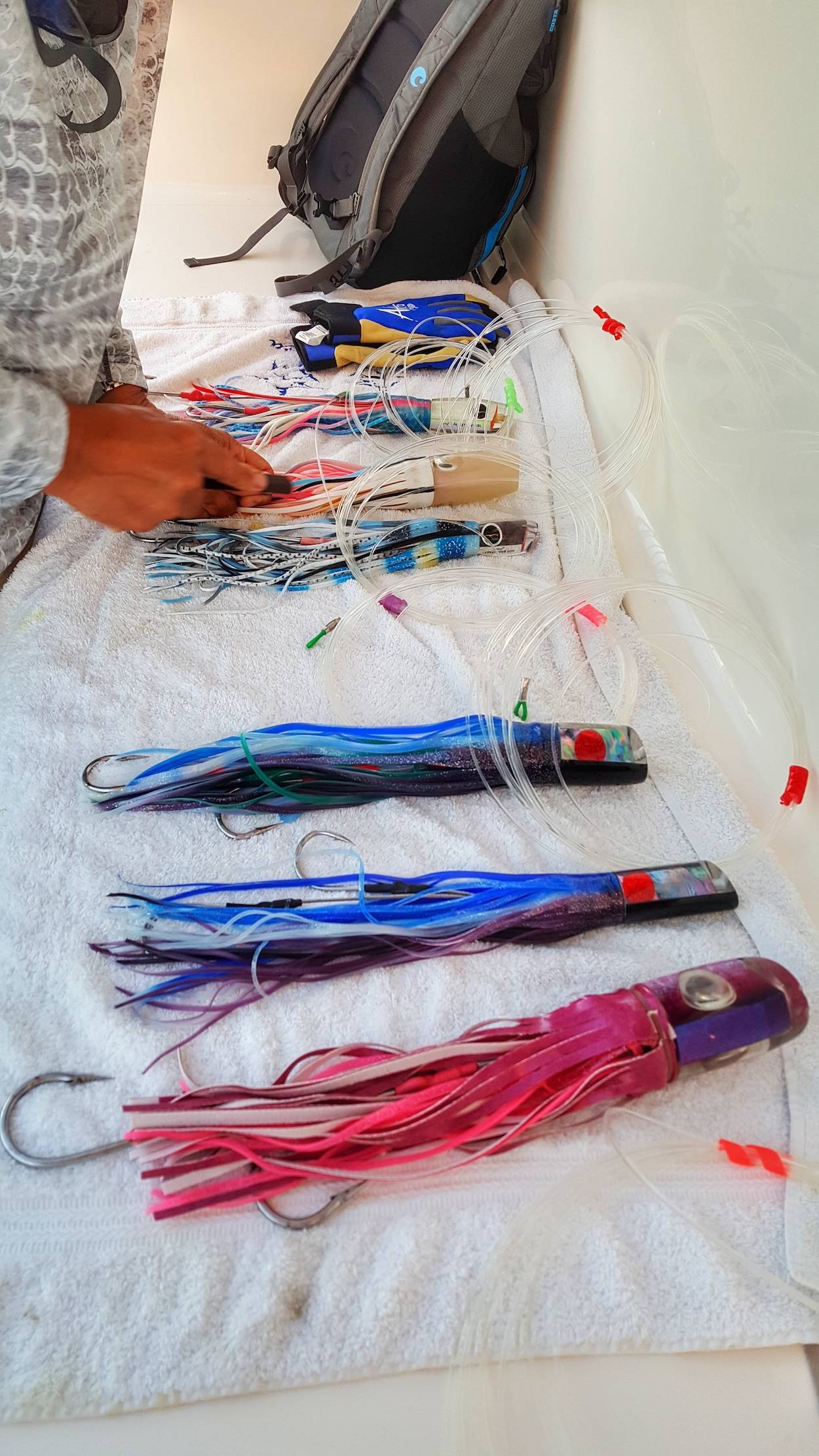 A study of skirted trolling lures and how to rig them will take you far deeper down the rabbit hole that plug fishing ever could. This is part two in our Rigging Trolling Lures discussion. My focus will be on head shapes, skirting materials and why how you rig is so subjective. The whole subject of rigging trolling lures takes me back to the beginning of how In The Spread came to be. The very first video I ever put together was about how to rig a Joe Yee plunger for marlin fishing in Costa Rica. This is an aspect of big game fishing that has always fascinated me. The species are you rigging for, marlin, tuna, wahoo, dolphin determines what your finished product looks like. So, what I am going to do here is narrow down the focus of skirted trolling lures to fishing for marlin. I am going to do this because there is a sea of difference between rigging for wahoo fishing and rigging for marlin fishing.

You can troll just about anything behind your boat. That doesn't necessarily equate to catching. The very best fishermen I know pay close attention to what they troll, how it is rigged and whether or not it is productive in the spread. No pun intended. Seriously though, spread management plays a huge part in whether or not you are catching fish or just driving around. What I do find around the world is that the very best big game fishermen use very specific lures, designed by very specific lure craftsmen. While they don't all use the exact same lures, there does seem to be a lot of overlap in the brands they run. Names like Big T, Black Bart, Moyes and Joe Yee are commonly found on top game boats.

To a large extent, trolling and rigging trolling lures will be species specific. Sure, there will be some crossover where you catch dolphin on marlin lures or tuna on marlin lures, but most fishermen have a set criteria in mind when they start rigging trolling lures. I would think it to be a rarity for a fishermen to decide to just troll lures without intent. How a fisherman goes about rigging trolling lures is very subjective. Even though most of the really good big game fishermen I know share common techniques in how they rig, there are always subtle nuances that set each apart. This is probably driven by their individual experiences and how they initially learned. I know my own rigging technique has evolved over the years.

When you actually get down to rigging trolling lures of the skirted variety for marlin, pandoras box flies open. The sheer volume of head shapes, sizes and designs is mind boggling. Pick a species and there will be in infinite number of options. Once you have your lure head, you are off into the world of skirts, hooks, hook sets, monofilament, cable, wire, shrink tube, chafe gear, spacers, rubber stoppers, glue, heat guns, lighters, floss, lubricants and whatever else you may be using.

It would be awfully difficult to explain how to go about rigging trolling lures in an article, even with pictures. The best way is to watch someone demonstrate how to do it while they explain what they are doing and why. That is why we have several videos on rigging trolling lures featuring some truly great big game fishermen taking you step by step through the entire process. What I can do here is share some thoughts on skirting and how the head and skirt work together to achieve a desired swimming action in the water.

Here is a very general guide to the head shapes and their positions in the spread for trolling. Keep in mind that how the water runs across a head shape is what dominates the swimming action.

I often see lures that are over skirted. Don't do this. What I mean is the skirt, once it is on the head, should not protrude or bulge out past the diameter of the lure head. Whatever comes behind the head is going to effect the action. The head is designed to swim a specific way. If you skirt is larger or wider than the head, it will dictate action and mess up the heads design dynamics. You really don't need as much bulk in the lure as a lot of fishermen think. The heavier and longer the skirt, the more influence is has.

Here is a great analogy that David Brackmann shared with me. If you don't know who David is, he is a hugely accomplished fisherman from southern California who has fished all over the world. He is an excellent teacher of big game fishing and does a great job of explaining marlin fishing principles. He says to think of a lure as a kite. If a kites flight pattern is too wild, you add a tail. This creates drag and slows the action of the kite. It is the same with trolling lures. By removing material from your inner skirt and lightening it up, you make the lure more active. If you use a longer skirt, it makes the lure slow down. There is a fine line here. You need balance. You want the head to control the action, not the skirt. Understanding this balancing act comes with experience. The more you run lures in various sea conditions and watch what they do and then tinker with how you rig them, the more you will begin to fine tune your thinking. The same goes for hooks. Double hooks slow the action. Less hooks, as in a single, the more action you get. Try different configurations to achieve the desired outcome.

If you want to watch and learn techniques for rigging trolling lures from some really accomplished blue marlin fishermen, check out this selection of videos. The more you know, the more you catch.

How to Rig Offshore Trolling Lures

This is just a few of what you can watch. If you go to our Marlin section or Lures section under saltwater fishing, there are more videos to learn about rigging trolling lures and how different head shapes swim and in what sea conditions you should run them.