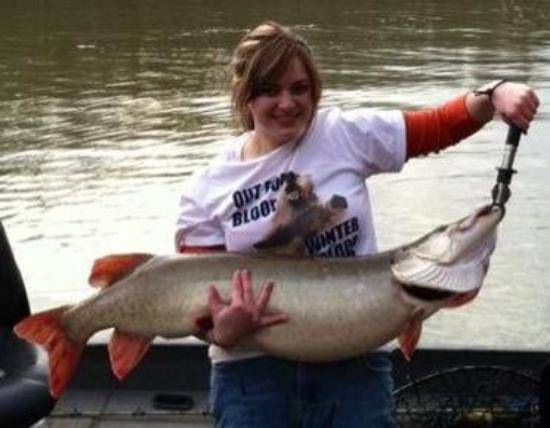 Spawning is something almost every angler of every pursuit is all too familiar with. It’s anticipated like Chirstman morning for some anglers, and loathed like a root canal for others. This all seemingly depends on how spawning effects each and every individual species.

For Muskies, oddly enough, the prespawn-spawn period has mostly been a non-sequitor; it’s either been out of season or nearly still under ice for many in the traditional musky range. But here in the south, where they’ve been spawning and making it work for eons, it’s recognized as a time of year that requires often decidedly “unmusky” type approaches, as we have discussed in my videos, but also an attentiveness to location.

Two things will draw Muskies to spawning grounds: current and temperature. I have a feeling that often the former trumps the latter slightly, but more often than not they coincide, the moving water being the inherently warmer water, and there being little doubt as to where the fish will be located.

But, unlike sunfish and bass and catfish or any other number of familiar freshwater species, muskies are broadcast spawners, meaning they don’t build or occupy a nest and don’t even play a role in their progeny’s life cycle past conception. Ergo, the actual spawning act occurs during a very brief period of time, and on both ends of that in either direction, they relate directly to these areas, but not directly amongst them. Sometimes a peak day temp and some direct sun will pull them super shallow, but too often they back off to staging areas.

These areas are usually if not always in “funnels” that form near the very back end of the coves and cuts that will draw prespawn fish. Almost every one of these areas in a southern reservoir will flatten out and the topography will become less distinctive but more distinct in how sensitive they are to it. A 1ft drop becomes the equivalent of a 15 ft breakline in the staging zones, and paying very close attention to this lay will allow you to narrow down the areas where the fish will most likely be congregated in on their path to and fro spawning. Being particularly tedious in covering these areas is even more important now than ever, and just because you don’t see fish in the first or second run doesn’t mean they’re not there. Be precise; be thorough, and err on the extremes of fast and the extremes of very slow. You’d be amazed how big a fish can sit in 9” of water unnoticed.

Watch some of our unconventional videos on muskie fishing: https://inthespread.com/freshwater/muskie