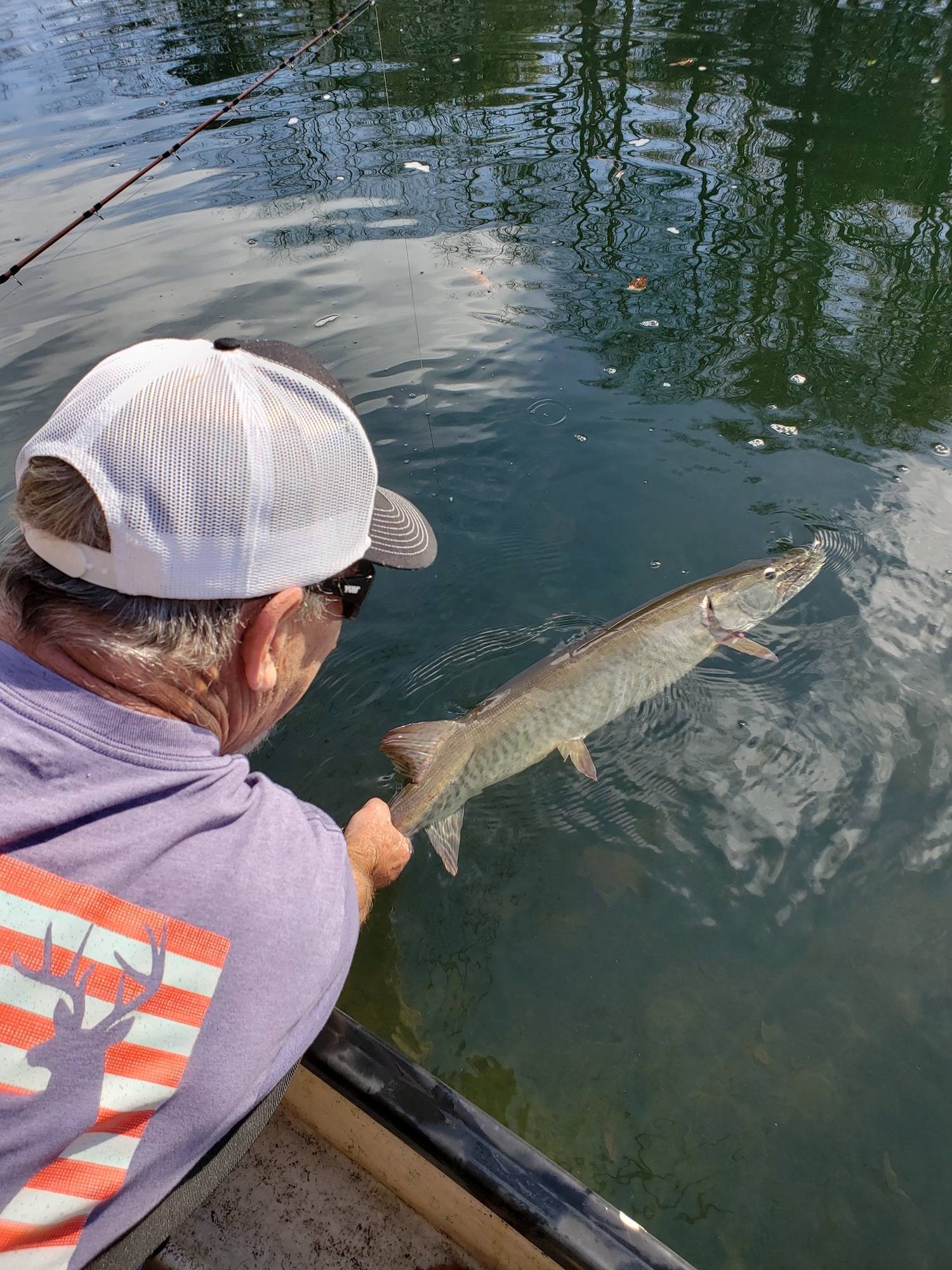 It's that time of year again and the Tennessee muskie are in full spawn mode as of this article. Yes, love is in the water! Beginning in late winter, and ending in around mid April muskie habits are quite predictable. When water temps hit the mid 50 degree mark, muskie will begin the ritual of the spawn in Southern waters.

It's a known fact that many freshwater fish migrate up river to spawn. Walleye, white bass, crappie and many species of suckers move out of deep water into the river systems and feeder creeks to spawn. Fish move out of the deep winter haunts to the usually warmer headwaters and river systems. Muskie take the "moving up" to a different level, and will travel many miles to reach there desired spawning grounds. Studies have shown that it's not uncommon for muskies to swim 20 miles (or more) up river to spawn.

Most fish will filter back to deep water after recovery from spawning but some will take up residence in the upper reaches of rivers , such as the Collins River. Muskie will start to move up with the first warm rains of late winter, staging along the way, feeding, and seeking out the warmer, sand and mud banks in shallow water. This is THE best time of year to get that ole big girl. Full of eggs, the big females will seek out ambush points on shallow flats and current breaks.

As the first few weeks of spring rolls around, male muskie will begin to seek out female partners as water temps rise into the low 50 degree mark. At this point, the ritual begins. When talking about Great Falls, or Center Hill lake, muskie have been moving, feeding, and looking for a mating partner. Fish from great falls have traveled many miles up the river systems to spawn. Spawning will begin usually in late March until mid April.

Center Hill lake musky are a bit different in that all the muskie will not travel to the headwaters, but some musky will seek out spawning grounds in the many creeks that flow into the lake. From the Pates Ford marina, muskie have opportunities to spawn in two major feeder creeks. Chances are that many musky will spawn in Sink and Pine creeks. These major creeks also have spawning suckers at the same time period of the muskie spawn. It's a sure bet that muskie can be found in these (and other) major creeks that feed the "Hill". So, you have the warmer creek arms, spawning suckers and muskies that will all be in the same area from late February until early May.

Muskie can be caught at the beginning of the spawn and periods of cold snaps can delay the ritual. In the upper reaches of the Collins river it is not uncommon to see spawning fish as early as mid March, or as late as the end of April. Most musky will recover from spawning by the middle of April. It takes about 2 weeks for muskies to complete spawning. This counts the "recovery period".

And after witnessing what actually happens during the spawn, I can easily understand why it takes several days for the fish to recover. Here's how it happens: Male muskie arrive first to the desired spawning area . The much larger female then arrives to the spawning area.. The male will bump and bite the female, stimulating her to lay her eggs. Female muskie "broadcast" there eggs and both fish leave the area after eggs are fertilized. In return, the female bumps, bangs, and bites the male, causing him to fertilize the eggs. It is common for a big female musky to latch on to her male partner and swim with the male crossways in her mouth, at times violently shaking her head. I've caught male muskie during this time that are cut to peices from the spawning ritual. The males will sometimes have deep, wide gashes, and chunks of flesh missing. Talk about rough sex!

But within a few days after the spawn male and female muskie recover, and by late spring show no visual signs of spawning. In the upper reaches of the Collins river, muskie will broadcast spawn over mud banks that have weeds close by. I've witnessed spawning fish in two to four feet of water on numerous occasions in the clear waters of the Collins River.

By the last week in April the spawn is mostly over in the great falls and Center Hill waters. Muskie will go on a feeding binge following the recovery period. Many fish will return to the deep water haunts, but some fish that travel many miles up the Collins river to spawn may take weeks to return to deep water. Some fish will take up residence in the skinny waters of the Collins river. Catching pre and post spawn muskie can be tricky, but well worth the effort. Cut up, and beat up, the fish will have an appetite and a attitude! Muskie are the only freshwater fish that bite and mangle each other during the spawning ritual. It's brutal and intense, yet part of the cycle of life for the king of fresh water. It's muskie sex and love is in the water!

If you want to learn more about fishing for muskie, check out our library of Muskie Fishing Videos. We share high level musky fishing tactics and techniques for fishing all year.