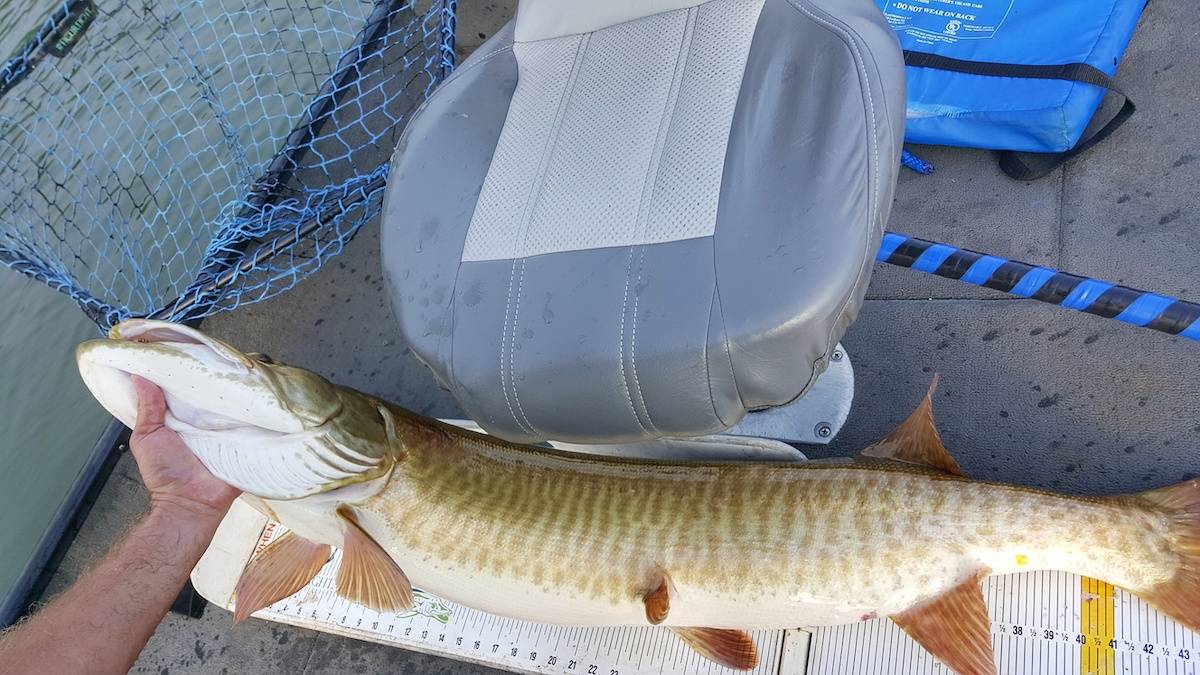 When the subject of reservoir musky fishing comes up, an often overlooked feature is the riprap, also known as rip rap. The most consistent piece of structure on any spillway reservoir might also be the most underappreciated, when it comes to musky fishing. Unnatural, industrial, and unassuming, it almost the a piquant after taste from the stigma of being where bank beating worm dunkers have direct access to a fishery, and thus seems beneath those with the luxury of a watercraft to fish. Yet, a lot of those worm dunkers slam dunk giant musky without even trying, and for good reasons...one of the many being the angle from which they present and that which many boat anglers don't. More on that in a bit.

By the very function of what the RIP rap serve in the construction of a reservoir, there is almost always a direct correlation to them and the deepest inherent water in any system. Ding ding ding. That alone should warrant them attention. Combine that with the terraced nature of their construct, and the fact that scattered rocks and boulders make for very topographical road maps for musky and other fish to traverse from break-line to breadline, and they're begging for a bulk of your presentation time in any reservoir system. By their layout though, I can truly understand why they often aren't the most popular. While most musky anglers are staunch casters and those trollers out there don't often find themselves tickling the ivory rocks of these parapets of stone, due to how tightly compacted the topographical lines are, there couldn't be a more cut on the dotted line structure situation in the world. The problem is...that last break though. Because there is little surface area between the shoreline and the primary break which usually falls around 10 to 15 ft deep, often casters are fishing right over the heads of the muskies.

But guess who isn't?

Many times the bait dunkers slinging a zebco 303 land just off shore and park and bark right off the primary break, and just wait for a musky to come by and slurp. I'm not saying that's the most efficient way to present to a musky in this scenario, but it's definitely more sound that randomly chucking baits diving 5 to 7 ft deep over an initial 10 to 15 ft break line. For muskies to move en masse to a structure's shallow environs, there often has to be some surface area to it. This is of no consequence to a long bar or point breaking into deep water at a focal point. But rip rap along a dam often only offer a few feet literally between the shoreline and first break, often times even less than a rod length. There isn't ALOT of surface area for a 4 ft long fish to move up to...so they don't. They move along the primary break line, or the first terrace of the rip rap dam face. The nice thing about this is: it's literally as simple as running a single rod or two and going in a literal bee like parallel to the face of the dam. Once this first break line is identified, and bounced thoroughly several times, usually the next break line is between 10 to 12 ft deeper and isn't that far away. Even better it "naturally" runs parallel to the first which itself was parallel to the visual surface of the lake.

If you must cast, in the words of Buck Perry himself, cast as you would troll. Slow rolling spinnerbaits down along this break line makes it relatively easy to more methodically work along down and even criss cross this man made straight line topography.

Remember those bait dunkers? You should take notes. Perhaps as I do, even place your boat close to the shoreline and cast off to present in the same angle as they do, after quickly eliminating the shallow shoreline, simply turn around and go long...sinking down a spinnerbait to slow roll is a fantastic idea. Or even Carolina rigging a "weedless" rigged musky tube.

Just remember the rules of structure still apply but you simply can't fish these man made musky magnets as you can expect to more natural features. Everything is stacked and compacted, but structure is structure, deep water is deep water, and a musky is a musky is a musky no matter where it swims. But you can rest assured...no matter what spillway reservoir you fish, a lot of them will be swimming to them and parking for a while. Don't miss out on the opportunity to capitalize.