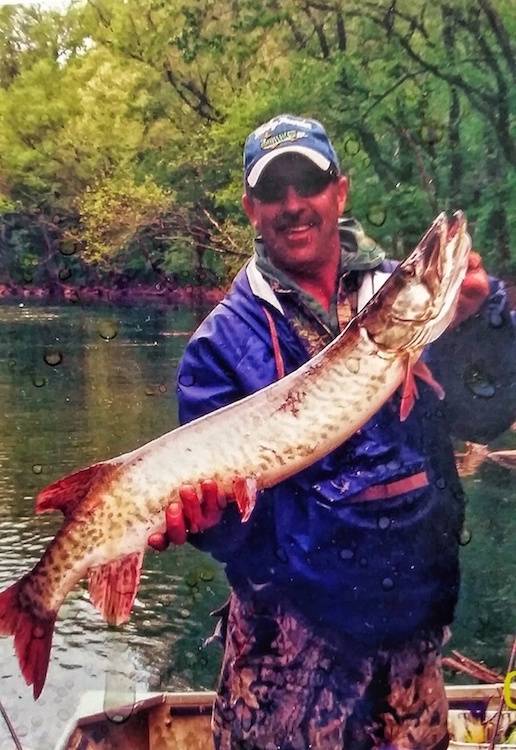 Native Americans called them devil fish. I've called them worst names, especially after getting "tooth tagged" or a large treble sinking into my hand. I can almost visualize a young native American hurling a flint spear into the crystal clear Collins and having a devilish time wrestling in a large musky and then the talk about the fight around the campfire that night.

Native muskies once roamed many rivers and streams in middle and east Tennessee. Then came the hydroelectric dams. Spawning grounds were wiped out and muskies were a thing of the past. Fast forward to the mid 1980's when native muskies were reintroduced into the Collins river. Stocking continued (when muskie fingerlings were available) throughout the 1990's and into the early 2000's. A three year study was conducted by the T.W.R A. with the help of Tennessee Tech University and results showed that muskies were successfully spawning to the extent that no further stocking was needed. A success!

Today, the Collins river boast a healthy population of muskies with occasional fish of 50 inches or better. There are currently 3 ramps that give access to the upper Collins river, which has a length of about 25 miles.

The turners bend ramp is located on Myers cove road and gives access to the "skinny" waters and even futher up stream is a public ramp just above the warren/grundy county line on hwy 56. Last is the V.F.W. bridge ramp which is located on hwy 70 just outside the city limits of McMinnville.

Keep in mind ramp conditions when considering any of the these ramps. You may encounter mud and debris on ramps, especially after heavy rains. A word of caution about the ramp at Myers cove. Swift current makes it "interesting " when loading your boat. We will get an extension poured this summer to make the loading process much better, so stay tuned!

Many types of musky lures can be used to catch fish on the Collins. Crankbaits. Spinnerbaits, gliders, top water lures and live suckers all work well. Essential tools needed include long nose pliers, a big net (boga grip). Heavy action rod, wide spool reel, 65 or 80 pd no stretch line. Polarized sun glasses, plenty to eat and drink. A first aid kit is always a good idea. Anything can happen with a musky in the net or boat. You have been warned!