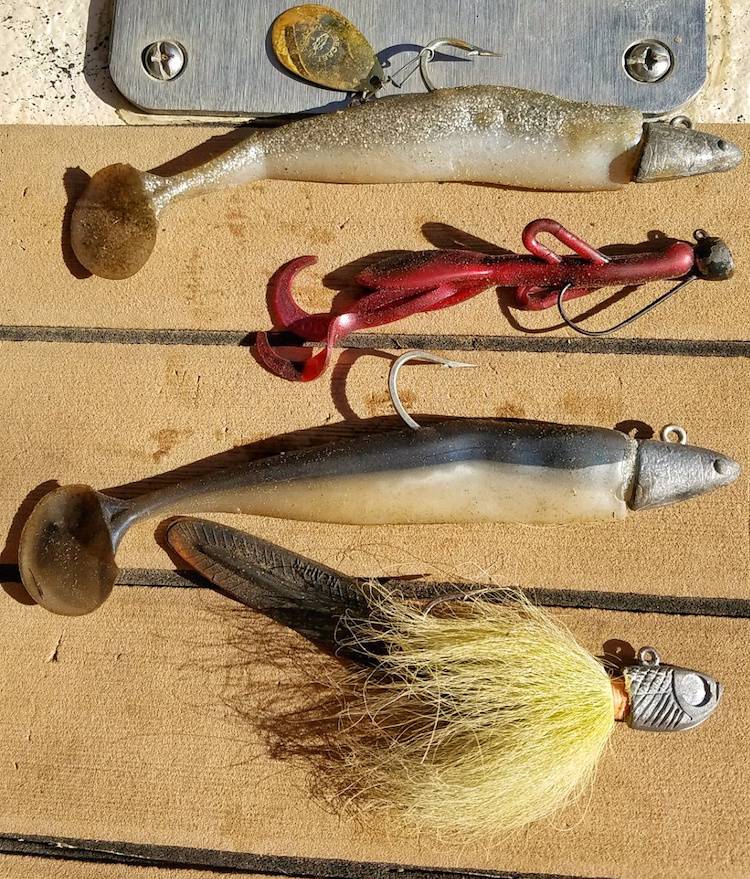 What could cats and muskies possibly have in common you ask? Cats (not catfish) are instinctively good hunters, always sneaking around, lurking and ready to pounce on unsuspecting prey. Tie on a lure and toss it out in the back yard and have some fun watching how cats react. Take the hooks off first!

I've learned over the years that muskie fishing can be challenging when your dealing with clear, skinny water. At times you can see the fish lying along side a weed bed or if the water is super clear muskies can be spotted in ten feet of water. The upper half of the Collins river has plenty of weed beds, gravel bars and slick limestone bottoms. These are the times when sight fishing and the "cat & mouse game come in to play. I make sure to have hooks on the lures for this cat & mouse game. Polarized sunglasses are a must!

First, I always have some type of sinking musky lure tied on and ready to pinch hit at a moment's notice. I stand up and search the clear water as I'm working lures, looking for "Still" fish. That's a musky that hasn't seen you yet. When a fish is spotted I back off and get the boat in the proper position. Instead of tossing that glider on the target, I grab the jig rod and toss it out in front of my target about four feet. Let the musky jig sit there. Keep your eye on the fish and the rig. After a few seconds, pop that jig off the bottom about a foot. The first movement of the jig usually will get the musky to move in. Add ever so slight movements to the jig. Play cat and mouse. I've watched finicky muskies turn on to this approach many times over the years. It's an exciting way to fish. Watching a musky turn sideways and scoop up a well placed jig. Timing the hookset and seeing with your own eyes the battle from start to finish. This method also works with following fish. Tossing a jig or soft, sinking plastic after a sluggish follow will often be the right choice for success.

Jigs combos are not the only lures I use with this method. Other lures such as slug-Os, and the eight or ten inch Fin-S are excellent choices. I also keep brush hogs on hand. In the deeper water of Great Falls and Center Lake I go to larger lures and vertical jig. On a sunny early summer day I decided to apply my cat and mouse game to the deeper waters of the Caney Fork river in an area where I knew muskies should be. The difference is water clarity and depth. Unlike the skinny water on the upper Collins. I'm vertical jigging in the blind from ten to fifteen feet of water. I cant see what's down there. So, I played the C&M game. All it is is slowing way down and not "ripping" your lure three or four feet at a time. Oh sure that technique works most of the time but I'm talking about slight movements of a paddle tail or a Ten inch Fin-S or jig combo. Using the Fin-S paid off for me that morning with a nice 49 incher. Later that morning I caught a mid 30 inch fish. After letting my lure hit bottom I waited a few seconds and gave the lure a quick three foot rip followed by a long pause. Then a short tap of the rod allowing the lure to only move a couple of inches. Another long pause followed by another rip of three feet, another long pause. I repeated this technique throughout the morning and then, BAM! A solid hookup. I'm convinced in my mind that both of the fish I caught came in to look at my "mouse", and the "cat" pounced! I've since caught muskies using this tease method of vertical jigging.

So the next time you encounter clear, shallow water in any river look for these types of opportunities and have a throw back jig/plastic ready to toss on a following muskie or the "still fish" you spot on a weed bed. Chances are you can experience the cat and mouse game for yourself. Here kitty, kitty!

Check out our collection of muskie fishing videos https://inthespread.com/freshwater/muskie