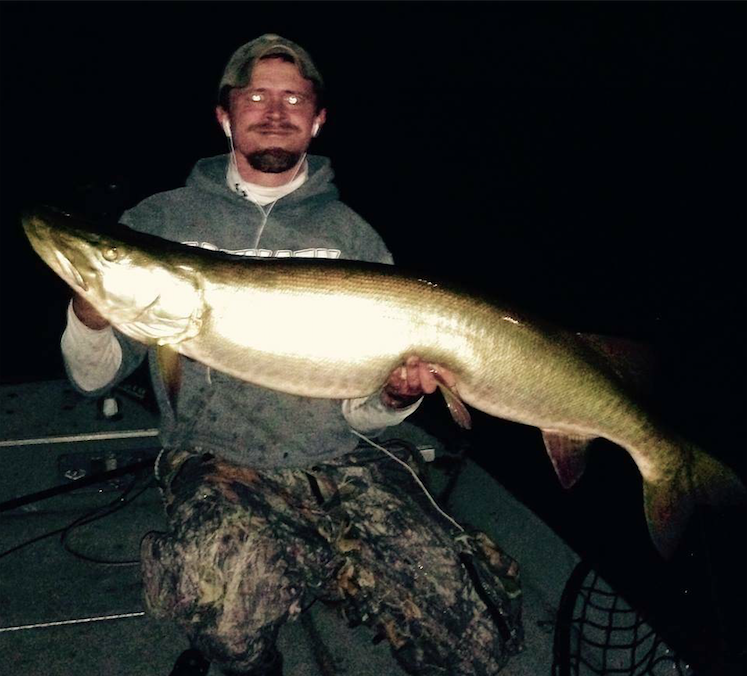 One of the things I do strongly adhere to is there is no absolute to presentation controls, especially with winter muskie fishing. In any given moment there can be several different ways to trigger a response from a given fish, be it subtlety or audacity. Even in the cold of winter, speed can be a key, as it is always one of the most integral keys, but contrary to the thinking of their metabolism, sometimes extremes are what is required. By speed and extremes, I’m talking numbing “extremities”, whereas zero or drift speed, or blazingly fast.

Either one of these are often required to trigger a “snap” reaction in the cold water periods, but it isn’t that hard to do. The biggest single lesson for angling this time of year is to be thorough. Very thorough. If you’re going to fish an area you know has fish, don’t just drift through it once.

In fact, don’t EVER just go through an area once.

But especially this time of year, an area isn’t truly throughly checked unless it is worked at least 3-4 times with with presentations on the extreme ends of size and speed: slow and small, super fast and erratic and small, or super slow and big or fast and evasive and big.

Now when I say fast, I don’t necessarily mean burning a bucktail, which seems synonymous with speed (although in high muddy rivers in winter don’t discount it), but for small baits, things that can be ripped or worked aggressively such as X-raps, Berkeley Jukes, Berkeley Warpig rattletraps, or even Carolina rigged flies that can be ripped through the water column, each of which are accentuated by an element of hang time on the pause.

For larger baits, you want things that are you evasive and responsive to high bursts of energy, with least resistance. The truth of the matter is, you can physically rip a bait faster than you could ever burn one with any reel, and this allows you to exercise extreme speed in short triggering bursts, followed by the inherent pause to pick up slack.

Many rubber presentations fall naturally into this category, although I’m a big fan of the H20 Ramhead for its modular weighting options, or the Switchback and Switchback halftail cranks for the same reasons: their lip design is meant more for swing and swag than head wag, so they have less resistance on the jerk than similar cranks with a lip angled out from the curve of the bait instead of integrated into it. These style of baits respond sharply to jerks and pulls and the weighting option in most of all H20 designs makes them superior for adapting to different depth conditions.

Another category of baits that often find themselves staples during these conditions are glide baits and dive and rise baits. We’re all pretty familiar with the gold standards, but finding unique baits within that spectrum can be tough as they all can look strikingly similar in design. As far as having a larger glider that has swing on the glide, hang as a default weight, but can be weighted to make it rock down on the fall, it’s tough to beat Will Carpenter’s “Quiet Pill”. I’ve yet to find another glider do what it does as well as it does, and it allows for shallow and deep fishing with a seductive swing on the tap, and a slow rocking motion as it falls. It will even walk out side to side well out of sight, even in current, which can be a make or break element to your winter angling. Born in the rivers of West Virginia, the motherland of musky gliders, makes a couple squirrelly and straight gliders in his eponymous Elk River Musky lures line that are made to work fluently in current, and shine when you need something evasive and quick but don’t want to leave a large “footprint” in the water. Then on the other end of the spectrum of gliders, sometimes you want something that doesn’t do much at all. To call DJ Customs Sinuous Glider a Glider doesn’t really do it justice: I Has one of the most amazing head turns on a tap, where you can almost make it moonwalk in place, swinging its head and tail pivoting back and forth within its own space, while hardly moving forward at all. This is especially deadly when you want something with some profile that can stay in the same spot for an extended period. Easily one of the best “zero-G” baits I’ve ever personally thrown.

It can’t be neglected to say that DJ’s also makes a series of pullbaits, the Resurrector, which has modular weighting options as well which are second to none, as it can be fished erratically as a traditional super buoyant dive and rise, or as a slow pull and suspending bait, with a ridiculous “hammer time”. Along with the Warthog series of H20 dive and rise baits with the same weighting elements but a more consistent side to side dive on the pull, they offer two extremes of the same theme with the ability to adjust weight accordingly in seconds.

While there are no hard and fast rules for any season, just remember that winter time cold is a period to explore the extremes more so than any other season. You can’t go too small, and you can’t go to large. You can’t go too slow; and you can’t humanly go too fast. Keep this in mind as you grin and bear the winter grind, and stay sharp, because this is the time of year you have access to the largest fish of the season.