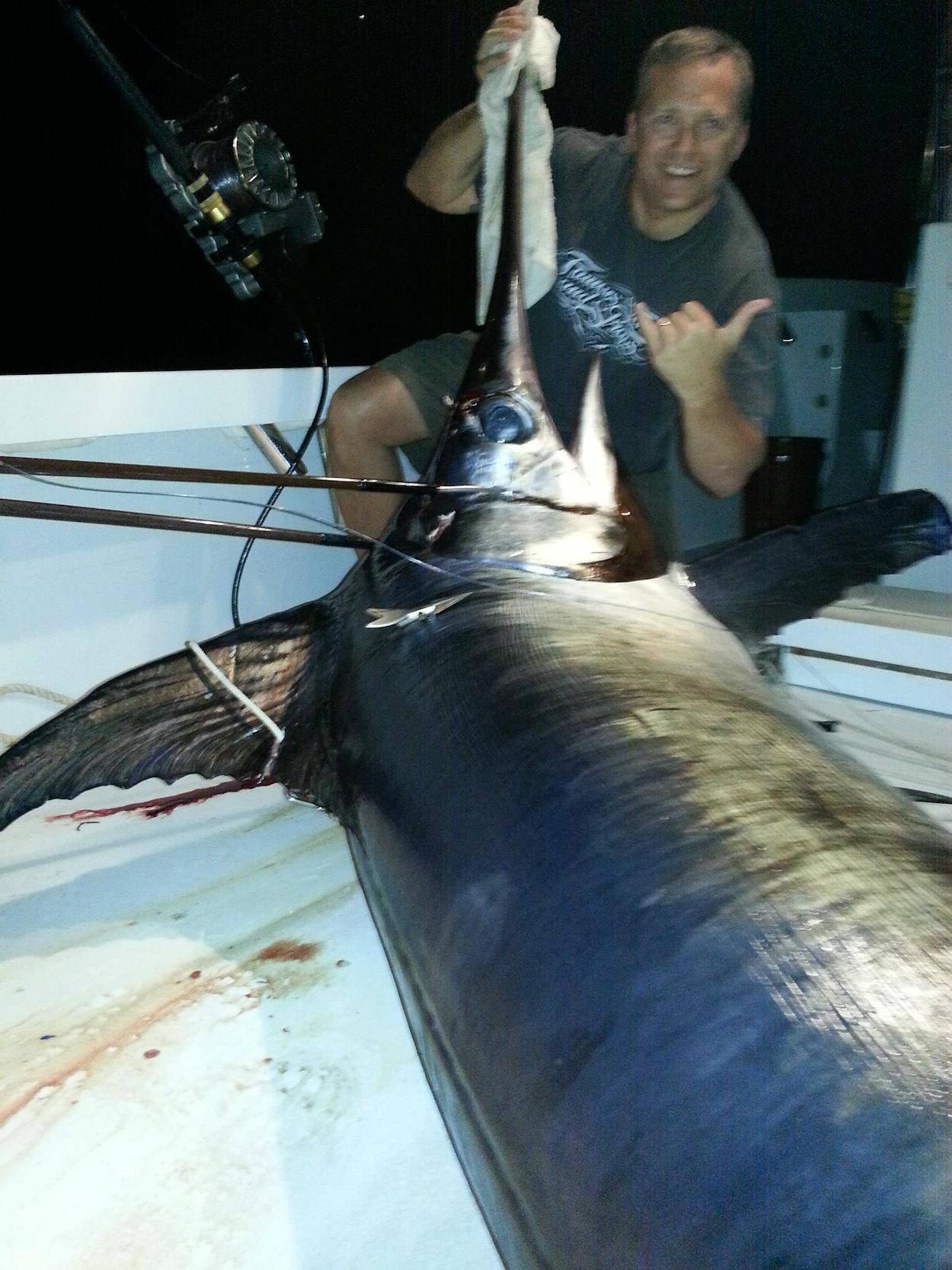 There is a mystique to swordfishing that transcends your everyday offshore fishing experience. Nothing really compares to the suspense and adrenaline that you feel rising in your body as you head out to the sword grounds. Once you hook into one of these amazing fish, you never really know what your are dealing with until the fish is very near the boat. Sure, there are some tell tale signs, for the more experienced, that can indicate whether you are dealing with a giant, but for the most part it is all guess work.

For any fishermen that has spent enough time swordfishing, you know that the species is a savage predator that traverses the water column from the deepest bottom to the absolute surface to forage. There is no other fish like the swordfish. This is a non schooling, migratory fish, that spends much of its time swimming alone or in very loose aggregations. You can find numbers of them in a given area or basking at the surface of the water, but swordfish a lone assassins. One the occasion you find multiples in the same area, it is mere coincidence. It is the concentration of food that has them in the same stretch of water.

If you have been swordfishing and watched broadbill swordfish in the water, seen underwater footage or even closely examined their physiological features, you will know that are built for speed and power. Stout is a word that describes even the smallest of fish. This skilled predator uses its overwhelming agility and power to capture prey. A common tendency is for swordfish to use their bill to slash or swat prey and then circle back on the stunned and injure fish to eat them. You particularly notice this in the way your baits get hit. It is how you react to that initial strike that usually determines whether you get another bite.

Although swordfish superficially look similar to other large billfish, they are actually in their own taxonomic family and not closely related to other billfish. The bill of the swordfish differs most noticeably from those of the other billfishes by being flat and blunt, rather than round and pointed. Swords have thick bodies that tapers considerably towards their tail fin, which is long and really thick on bigger swordfish. This is where they get their tremendous speed and power from. It is not uncommon for swordfish to reach 3 m (10 ft) in length. Photos and reports reveal fish growing to well over 4 m (14 ft) in length and 640 kg (1,400 lbs) in weight. The International Game Fish Association's all-tackle angling record for a swordfish is 536 kg (1,182 lbs). As with most predator fish, females grow to much larger size than males.

Ultimately, as fishermen, our goal is to catch these beasts. Consistent and productive swordfishing comes down to experience and knowledge. You have to fundamentally understand swordfish behavior patterns to know how to bait them. Why do they do what they do? In the day, the fish descends to great depths and as the sun sets, it moves up closer to the surface. Why is this happening? What are the motivating factors behind driving this intense pattern? It is really quite simple. Food. Swordfish are where the food is, at all times it seems. Find the food, find the fish.

It all starts with building blocks of the oceanic food chain, plankton. Plankton rises and falls in the water column with the movement of the moon. It would seem logical that it would be the sun, but it is the moon. As microorganisms like plankton move, so moves the smaller fish and cephalopods (think squid and octopus) that feed on them. These creatures make up the foundation of the food chain. Larger and larger sea life will follow this daily migration or diurnal pattern and that is why the swordfish are making their insane movements from +/- 600 m (2,000 ft) up to near the surface.

Boom. There it is. As the food goes, so goes the swordfish and where swordfishing activities take place.

Swordfish are thought of as deep water super predators, but they spend much of their time up in the water column. Found in the Indian, Atlantic, and Pacific oceans, swords are primarily a midwater fish, roaming at depths of 200-600 m (650-2000 feet). Swordfish range across a wide temperature tolerance, unlike most of the fish, excluding some tuna and sharks. They will migrate seasonally to warmer waters in winter and cooler waters in summer. This highly migratory species can often be found where ocean currents and deep water structure meet and food productivity is high.

Being among the few fish species known to traverse extreme thermal barriers on a daily basis, spending prolonged periods hunting both at the surface at night and at great depth during the day, affords swordfish near constant access to food. This diurnal activity pattern results in extreme thermal fluctuation, with physiological processes subject to temperature changes in excess of 15°C within a matter of minutes. How is this even possible? Although many fish species also exhibit tolerance to short-lived changes in temperature, the swordfish has been shown to reside and hunt for prolonged periods in very disparate conditions, providing a daily pattern that subjects physiological processes to extreme and contrasting conditions. This daily pattern provides swordfish with a unique foraging opportunity that allows them to feed on rich prey resources both during the day and at night.

Swordfish are equipped with a very unique adaptation or “brain heater” which allows for swimming in cold deepwater. The tissue near the eyes routes the blood supply in a way that heats the brain.This specialized vascular system is similar to that used to heat and cool the bodies of other large pelagic fish species such as tuna. The ability to heat their blood helps the fish move quickly through rapid temperature changes in the water column and help prevent rapid cooling and damage to the brain, as a result of extreme vertical movements.

Swordfish start out as extremely tiny larvae, no more than a few millimeters long and weighing only a few hundredths of a gram. Soon after hatching, they already have a visible bill. The growth rate of swordfish is remarkable. Because swordfish undergo such an amazing transformation in size, they eat a wide variety of prey, throughout their lifetimes. At a young age, they eat tiny zooplankton. With increases in growth comes increases in the size of the prey they consume. As adults, they eat fairly large bony fishes and squids.

Swordfish are opportunistic apex predators, feeding at the surface as well as the bottom of their depth range, as evidenced by stomach contents. Research indicates a daily feeding pattern with heavy focus on nighttime feeding, when they rise to surface and near-surface waters in search of smaller fish.

A recent study found the majority of large fish prey had been slashed, while small prey items had been consumed whole. Squid and cuttlefishes found in the stomach contents of swordfish commonly exhibit slashes to the body. As mentioned, this apex predator does the best they can to injure food targets, so that they are better able to catch it. They are very fast, moving at speeds up to 50 miles per hour. This allows them to have an advantage over their prey.

This number of options really makes for interesting decisions when it comes to swordfish bait rigging.

Swordfishing and How to Catch Swordfish

While it may appear to be challenging, and it can be, don't get me wrong, if you follow established fundamentals, it can be made far easier. The most important thing you can do is get out on the water and start dropping baits. Time put in equates to experience, which translates to actionable knowledge.

Understanding the drivers of swordfish behavior can help get your mind going in the right direction. In The Spread has tools that will help get you over any obstacles or fears you might have surrounding dropping baits to more extreme depths. This is technical fishing, to say the least, but not overly complicated.

We will break down current and how to deal with it to hit and specific spot with your bait presentation. The first thing to wrap your head around is that the current is pushing your boat and the line at different speeds. Your ability to drive the boat, drop bait(s) and drift without letting out excess line is critical and easily learned. Whether you even have current, where you are fishing, determines your deep drop technique. Again, the most important thing you can do is to get your line wet. Practice.

It is in the nuances where more success is found. In The Spread allows you to learn a vast array of techniques, so that when a given scenario hits, you will be confident. It is time to take you curiosity and turn it into time well spent. See how to put baits on target, hold bottom position, drive your boat to stay up and down with the line, recognize the bite and pull less hooks.

Skill that only comes with experience.

We provide several educational fishing video options for novice to advanced fishermen on swordfishing techniques. If you want to learn more about how to catch swordfish, please visit our swordfish fishing video library.

Our swordfishing videos go extra heavy into making swordfish rigs, gear, tackle, bait rigging, safety and most specifically where to look for swordfish and what to do when you get to the grounds. Whether you are deep dropping for swordfish in the daytime or suspending baits at various depths in the water column at night, our videos can show you the way.