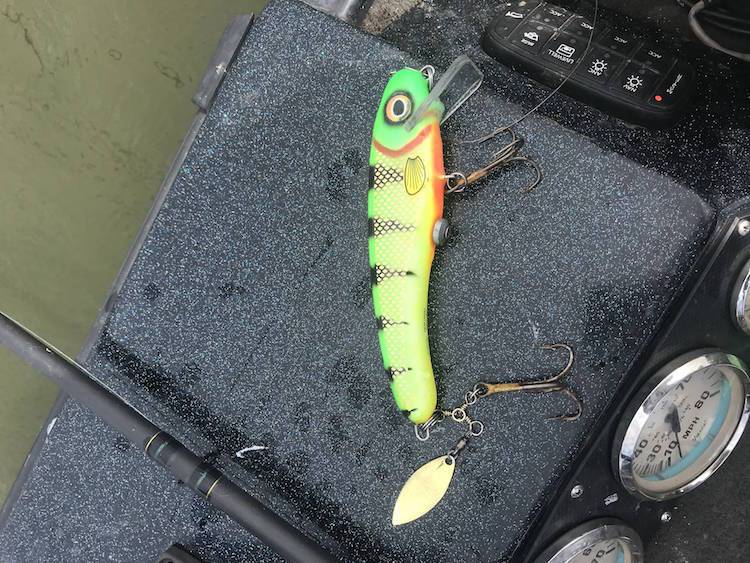 I’ve seen it too many times.

Actually, I’ve seen it in more than half of the over 30 50” plus fish I’ve put in my boat in Tennessee, come to mention it.

These animals with a mouth you could easily slam dunk an entire double whopper into and probably swish the net between the teeth, very rarely if ever have found themselves in my net with the lure not just visible, but barley hanging by a thread of a barb off the back hook after a very subtle strike.

Whether it’s the back hook of a whopper plopper 110 which has put 4 muskies over 50” in my boat so far, and lost two more at least, or the soft love tap against a Chad Shad or other small crank as its slow trolled and twitched, or even the low 50” musky I captured on Musky Hunter television a few years back, which had the single treble of a 3” bass crank in the side of its jaw, after nothing more than a firm solid feeling of weight, it has led me to believe 2 things: fish in general have highly acute conditioned instincts but are other pretty friggin stupid, and that they perceive objects their environment as compartmentalized entities even when they’re entirely singular.

Let’s take for instance a story that happened about a year ago. I’d had good friends Anton and Slav, two solid Ukrainian transplants to Atlanta and Toronto respectively, come fish with me a couple days. We’d lost a pretty damned nice fish the prior day on a deep bass crank, but it was a fairly shitty weather condition even by spring standards and it was getting to the bottom of the 9th. So I decided to improv and take one of my H20 Barbarians, and add a small blade to the back of it via a 3 way swivel, the idea being that we could use the body and physics of the Barbarian to deploy and employ a more subtle stimulus with a catch to it.

Basically, by weighting the Barbarian with a quarter ounce screw in weight, it allows for it to have a somewhat “lifted” fall, almost a bounce when you hop it, that engaged the back blade wildly, then as it begins to fall, the blades are small enough to slowly engage under the fall rate, but not provide so much resistance it destroys the organic nature of the Barbarian’s motion.

Long story short, 5 casts later guess what a 38” musky had in its mouth?

Not the bait. Just the treble hook with the blade attached to it.

As of late, this alone has boated me 5 fish in the past week and a half and has lost me at least one giant and had follows from several others.

There are other ways to do this and notice it too, for instance I’m pretty convinced this is why the squirrelly tail glider has become so popular (although I really do prefer a straight model at times...depends on the glider) and the more you begin to see your baits and presentations as not singular entities but combos of stimulus, the creativity factor goes way up in your own angling. But for starters, just try that 3 way swivel small blade trick on a bait like a H20 shallow cranky nitro, or a Barbarian, to get a feel for what I’m talking about.

Then just relax. And go nuts.