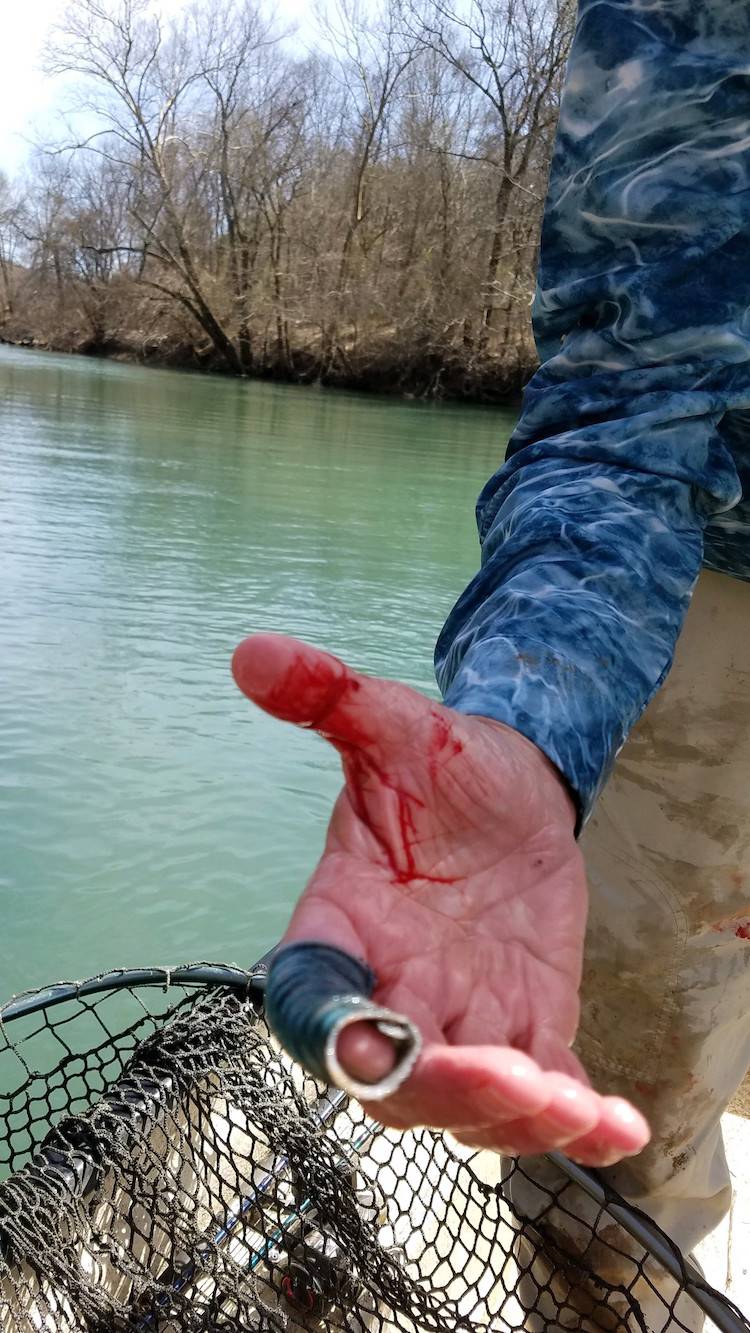 Getting Hooked by a Fishing Hook | In The Spread - Dwayne Hickey

I've been hooked on muskie fishing for 25 years and over that period of time I'd say I have about a half gallon of blood invested in the sport. Yes, blood. Through trial and error, I have concluded the following: Don't mess around with the business end of a musky!

We talk a lot about how to care for a musky once it's in the net, and equally important is taking care of yourself during the unhooking, picture taking phase. No, a musky will not try to bite you! Your not holding a wild cat or a rattlesnake. However, you are trying to get very big hooks out of a mouth that's full of Sharp teeth. Anything can happen and you can learn from mistakes made by me and others over the years.

Like the time early in my musky days that I had the bright idea of leaving the 8 inch phantom lure( size 7 treble) in the critters mouth for a nice picture. Just about the time i was lifting the fish up for the "shot" my partner said " I don't think I'd do that"! But, it was too late. A quick, powerful twist later a #7 treble deep was in my index finger.

Let me tell you from experience, do not try this at home! Bass size trembles hurt like the Dickens for sure, but musky hooks embedded in flesh is big time. After a few seconds expect big time throbbing. I'll admit I could not handle even trying to push the barbs through the skin. I managed to remove the lure from the hook and off to the E.R. I went. It took regular pliers to push the barb through the skin.

It happened again a few years later. Note to self: Needle nose pliers in right hand. Keep left hand out of net while unhooking musky! That was another E.R. trip. And there was the time when I hooked a 38 inch muskie while wade fishing on a gravel bar. It was a good top water strike and the fish jumped twice as I walked backward toward my net, which was laying in shallow water. Just as I bent over to grab the net the muskie jumped again. Right into the back of my calf! She was still green as she thrashed the big treble deeper in my calf muscle. I was in big trouble at this point.

Musky hooked to lure, lure hooked into calf. Muskellunge thrashing, half in the water, half out. I grabbed my pliers and finally got the fish unhooked. She swam away in better shape than I was trying to remove the treble from the whopper plopper. After I was free from the lure, I headed for home. My calf was throbbing but I was determined to get the hook out myself and not go visit the local hospital. I persuaded my neighbor to push the treble through the skin as I clamped down on a towel with my teeth.

I remember another time when a buddy was with me and he caught a nice 43 inch fish. He was convinced a good pair of work gloves would allow him to grab up his fish for a picture. Bad idea! NEVER put your hand in the mouth of a musky with gloves on! That fish tore him up.

As I said before, a musky will not intentionally bite. They will however thrash and twist during the unhooking process or when getting there picture taken. These fish are strong and can twist right out of your grip. At the very least you can expect some blood from gill rakers if the fish makes a strong twist move. By the way, seasoned muskie fishermen consider these small cuts "battle scars" and are highly prized.

Always remember that anything can happen when muskie fishing. Be prepared, have your release tools ready and handle with caution. Wear gloves to protect against minor cuts when it's time for the money shot. And expect to earn some battle scars of your own!

In The Spread Fishing Videos