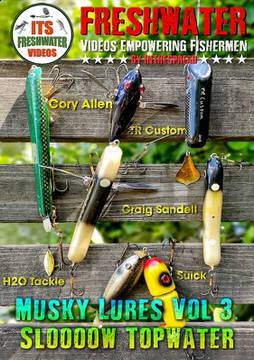 When fishing topwater lures or musky, much of what becomes the focus is related to "disturbance". People want to see a bait create some kind of commotion relative to their sense: something that plops, sloshes, buzzes, etc. While there is a time and place for audacity, most seem to forget that while focusing to make something "natural" shouldn't ever truly be a focus, most things that are "natural" make much less a commotion than many of even our most subtle baits. Especially in more confined or pressured situations, the larger muskie especially can be conditioned to ignore things with a raucous except for under near perfect circumstances. Utilizing topwaters lures that operate very efficiently on the slower end of things is probably the single most overlooked aspect of the musky game.

Most anglers become so enamored with the sounds and sights their surface lures are making, they forget probably the strongest case for using topwater...the two best controls for working absolute zero speed control slightly above are either letting something sit directly on the bottom, or float on the surface.

Working topwater lures painstakingly slow not only utilizes the function of using topwater in one of its finer elements, but also realize that their sensory perception in their world far exceeds ours even in our own. It doesn't take disturbance for them to notice, and often the less disturbance it makes the more attention they will give it.

Working topwater baits super slow will teach you just how many fish we all miss by working baits of all types way too fast, and these give you the ability to milk a single cast for all its worth. Often times the larger fish will barely nip the back of a super slow topwater, and almost always the judgement of a topwater should start from what it does at the slowest speeds and work up from there.

Musky Lures Vol. 3 features Cory Allen discussing topwater lures that have very unique traits to enable super slow action. Learn why Cory likes fishing lures from H2O Tackle, Suick, TR Custom and Craig Sandell. These are some of the very best lure designers in the muskie fishing world. Just remember, what you think is slow may not be slow enough.