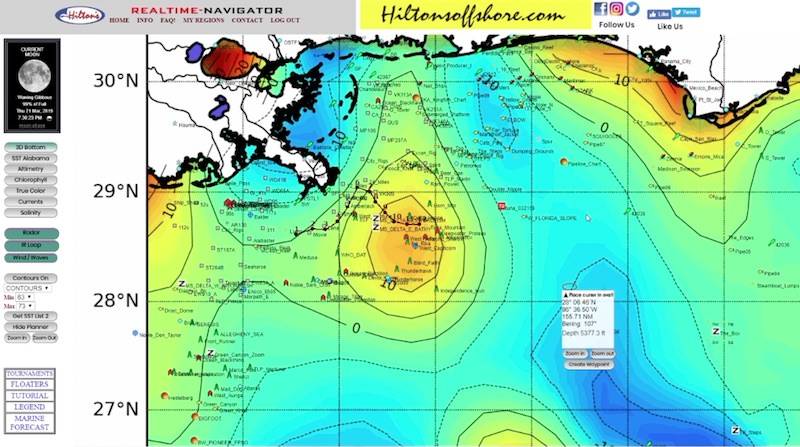 Around the world, the best offshore fishing operations utilize the most up to date satellite imagery to learn what areas of the ocean present the best conditions. These are areas where you have a convergence of optimal marine weather, sst or sea surface temperature, currents, altimetry, chlorophyll and salinity. Now, optimal is a relative term, so use it to suit your needs. What everybody wants is the most current imagery. You damn sure don't want to base you trip on data that is old. When you get where you want to go based on the imagery or data collected, you better hope the conditions haven't changed. Are you the type of fisherman that just heads out based on where the grounds are “supposed to be” or where you have caught fish in the past. What if there was a nice edge two miles further away than you were fishing? What if that was where the fish were holding? Would you miss out for not being informed? Perhaps. Probably. Yes, you would. Don't gamble. Know the fishing forecast before you go. Get the intel you need to make the most informed decision about where to start you fishing day and where to end it.

Some of the very best blue marlin, yellowfin tuna, bluefin tuna, dolphin, wahoo and even kingfish fisherman take full advantage of what they can learn from advanced satellite imagery. Some guys like to fish a rip, a tempbreak or a color change. Some like an upwelling. If you are targeting pelagic fish, you really don't need to waste time and money fishing an area that is less than ideal. For crews in the Gulf of Mexico, knowing where drill ships and moveable platforms are is critical. Hilton's updates these movements religiously.

There is one fish forecasting service that is always on the bleeding edge of innovation and the one used by damn near all the top crews in North America, Central America and the Caribbean. Hilton's Realtime Navigator is that service. Hilton's started out making fishing maps or charts that showed static spots to explore. When the technology finally caught up, Hilton's Offshore was launched. This online, realtime service changed the game. Much of the guesswork was cast aside. The ability to measure several dynamic variables afforded fishermen the opportunity to plan their routes very precisely. This saves time and fuel. When big tournament money is on the line, you better make the right decisions.

Check out this In The Spread video that gives you a unique look how it works, why it works and why you should give it a try.