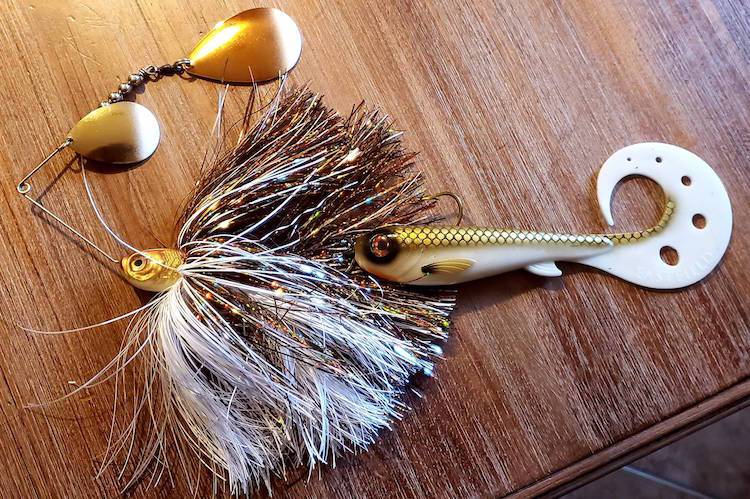 It's not uncommon to see trailer hooks, especially in the bass world. The musky world is catching on, but really the barriers between these worlds is so permeable that might as well not exist at all.

Musky anglers especially utilizing the somewhat underutilized safety pin style so popular in bass angling, often add a grub or swimbait onto the shank of the main hook, and often include a trailer hook past that.

I sincerely implore people to refrain from putting the "icing" on the main hook, and utilizing the "trailer" hook for just that: the trailer.

It seems almost uncouth or even sacrelige for some, in that you're occupying the trailer hook which provides extended hooking with another element that would inherently demand...another trailer hook. I heartily beg to differ, for several reasons.

First of all, the swimbait or grub or what have you being placed upon the trailer hook should be complementary in size to the hook itself, ie larger bodies for larger swimbaits and smaller bodies for others. As far as the bodies to use, let your creativity run rampant. Ive used everything from Kalin's grubs and Shadalicious paddletails to full body swimbaits like Eastfield Wingman paddletail and curly swimbaits on larger models. There really are no rules here except to balance the body size with the trailer hook and "trailer" you'll use.

Another element to this, as opposed to putting a body right onto the main shank is that it will inherently "hinge" from the main body and function as an almost entirely different stimulus, and that can make all the difference. For instance you may have a larger spinnerbait 1.5-2 ounces like a Black Label model, my personal favorite, and a trailer hook roughly 2/3 the size of the main shank, which serves as a good rule of thumb. Adding a 3" grub to this assembly might be almost moot, and not even fit well onto the trailer hook, to where it is more "hook," than "trailer". This is redundant. Now utilzing a 5-6" swimbait body or grub would more likely fully encompass the trailer hook and complement the profile and stimulus of the larger bait its trailing. This subtle stimulus offset slightly from.the main body provides a more complementary stimulus relative to the main body than if it were attached to the main shank, and will entice fish somewhay less committed to the whole package to instead accept the "consolation prize" of the trailer.

A trailer hook in and of itself wont provide any stimulus in the water column to trigger a less committed fish, and the body attached directly to the main body migbt be entirely overwhelmed by the primary bait's blades and skirt, rendering it redundant. But utilizing the element of the trailer hook FOR a trailer gives you the benefit of increased hooking should a fish decide to wreck the entire bait, and the added ancillary stimulus of a separate bait body working in conjunction with but not entirely married to the primary bait.

Muskies dont necessarily like their mashed potatoes and corn toucbing on the same plate apparently...whodathunk.