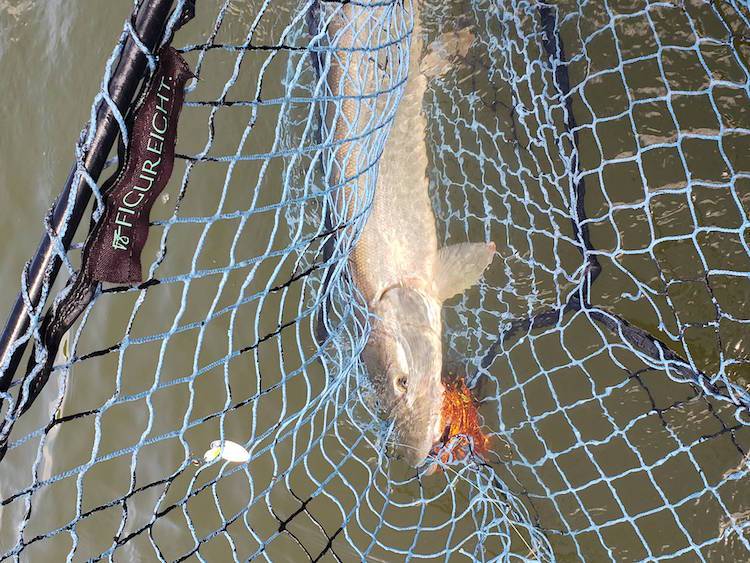 It's a topic I somewhat intentionally avoid regularly, and for good reason. Its been written about as much as Bennifer or Taylor Swift's recent new ex-boyfriend song. Blades in musky fishing are almost synonymous with the act of their pursuit itself to many, despite being relatively untouched by other game fishermen, and have become the standard presentation of musky angling.

Understandably so, it's a spinner bait that is both easy to work and somewhat universally effective in a variety of situations. The thing is though, the "how do you work it" mindset has severely limited both the awareness of what differentiates one blade from another, as well as how to most creatively utilize their strengths.

The weakness of the blade however, lies in its inability to execute super slow to dead hang speed control. Baits like Lee Lures "Boilermaker" incorporating a buoyant body to the traditional blade allows for slower and shallower tracking even to the point of dead stopping, but this also causes a compromise to being able to fish deeper and slower or super fast. It's a brilliant concept that immediately unlocks new possibilities for the blade, but inherently places some restrictions upon it as well. But hey, that's why they make cross-lok snaps right?

Speaking on the more traditional straight shaft inline spinner baits, there is literally as many variants on it as there is off-brand versions of Sprite at a supermarket, and while yes they all seem to have the same general "taste", its important to be able recognize the differences, because trust me they ain't all made equal.

Now, before I give any suggestions on specific brands or musky lures, lemme lay out some ground rules for the traits I look for in a good blade versus a "meh" blade. Basically almost every spinner bait (hopefully) will engage with a modicum of speed and resistance and be able to handle a good clip between let's say a relative speed metric of 3-7, with 1 being essentially barely reeling and 10 being the maximum of what is humanly capable for a person to reel a bait in.

Now beyond that, another thing to notice is how well the skirt responds. One of the few things I am OCD about in my life (I'll give you a hint, hygiene didn't make the top 10...) is a blade that spins on it's own shaft making the skirt twist instead of breath and pulse in the vortex of the blade. Often times, most times really, "bucktails" almost inherently demand a small bend at the front of the shaft at about 30 degrees to ensure it doesn't spin, and you get the more spin for your crank and the skirt does it's cool little organic looking tie dyed raccoon in the spin cycle look. This texture complements the solid tubular vortex the blade creates and if you wanna try something really insane, consider attaching a fly to the back of an inline sometime and see what happens as well.

One of the other considerations to make is the sheer quality of the components itself. Often times lighter wire is used for smaller blades and smaller blades are often made thinner in an attempt to decrease factors that fight against the decrease in resistance needed to engage the blades, but often this is merely a cheap way out of craftsmanship and attention to balance in the bait itself. The best blades will start up and maintain spin at even the slowest speeds, and smoothly be able to go between this and 11 on the dial without missing a beat. This is mostly determined by the quality of clevises, balance of the baits shaft, and the density of the blades matched to a proper pitch and cup. Too shallow a pitch spins at slow speeds, but doesn't handle mach 4 well and decreases the vortex which makes the skirt breath and pulse. The other direction, and it takes almost an outboard trolling speed to engage and maintain the blades spinning which it another limitation all it's own. Finding the bucktail that balanced these all out is the struggle, and I've yet to find very many that do.

So here comes the part of the show where I unapologetically plug something, but not without having first given provocation for doing so. I've thrown quite a few inline spinners muskie fishing in my day, and at one point even repped a company that made them as a cornerstone. I always found myself leaning away from them though due to the types of limitations listed prior. Even the best would have chinks in their armor. Recently though I was introduced to blades from Spanky Baits, which at first glance due to the sheer inundation of blades on the market, didn't really prompt much more than a side long glance from across a crowded room from me.

But upon throwing them and putting them through a series of pretty strenuous paces, I noticed how even on the thickest gauge wire I'd ever seen on a blade, especially anything 9-7 size, they almost immediately engaged on even the slightest tug, and could be "clocked" down to almost hibernation slow speeds, allowing a blade that could both "sleep walk" and peel out on the same retrieve at the whim of a moment. The blades themselves were also heavier and thicker than most I was used to, a gauge I'd seen prior only in the blades designed specifically for trolling and even then only on larger models. Yet even these 7s, 8s, and 9s would spin effortless at the slightest breath of resistance, and literally in a brazen attempt to use speed variance and janky maneuvering within the retrieve, I never saw the skirt of the shaft on any of them ever twist once. From light breeze to gale force, the tail simply responded to the power of its prevalent blade made vortex. Needless to say, I hadn't yet been able to find any of the weaknesses in these inline spinners that had made me avoid the topic let alone the presentation altogether prior.

Now that being said, I'm not saying Spankys are the only blades that "catch fish". Hell, they all do. But a critical look at their traits makes me state confidently that they have inspired me to reach for the classic bucktail far more often, especially in the 7s and 8s.

Lemme just put it this way: Once upon a time, a bucktail maker I had caught a couple REALLY big muskie on painstakingly attempting to maintain a spin slow rolling his 8's whom I asked to try and make for me some 8s specifically for super slow rolling, or as I call it "sleepwalking", told me rather succinctly, "double 8s arent made for slow rolling! They're made for burning..."

Let me state my firm belief that he was full of absolute shit.

Well maybe his weren't made for slow rolling, and many arent, but hese Spankys sure do it just fine and burn far better as well, due most likely to the proprietary blades made with density and perfectly tweaked pitch and cup.

Check em out at www.spankybaits.com. Dan can literally made any combo of blades and skirts you want and I kinda want to see the surprise on your face when you see how reasonably priced they are as well.

Be A Better Fisherman. Learn from our Muskie Fishing videos https://inthespread.com/freshwater/muskie