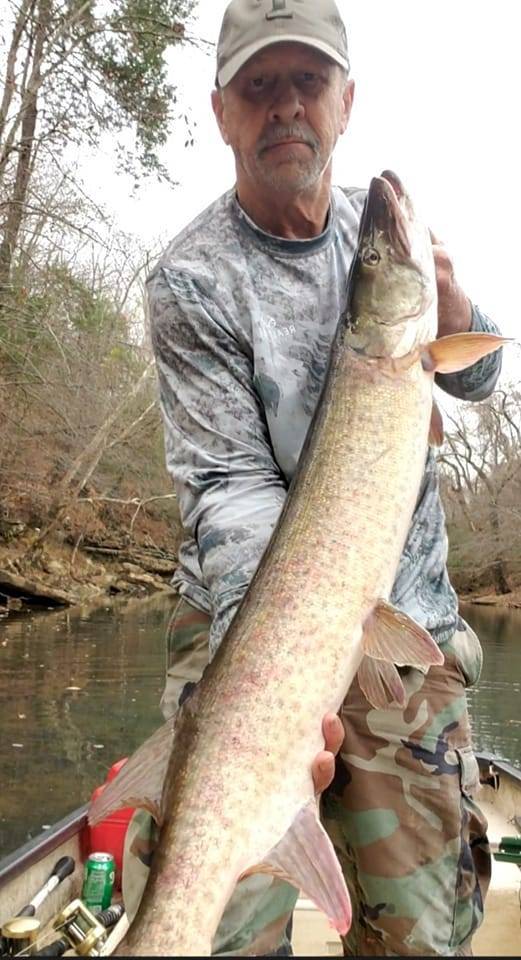 Another hot summer has past, the leaves are gone, and falling water temperatures have the muskies eager to put on some extra pounds. The months of December, through March are always the prime time for musky fishing on the Collins River.

After a long , low water period this fall, the Collins river finally has some current running and water level rising. As water temps drop below 55 degrees, musky fishing tactics change. This can be some of the best action of the year.

Before you decide to venture out on the scenic Collins River, always do your research and have an idea on water level, weather, and a location device. Normally, the Collins is a gentle, peaceful flowing river that winds through the countryside, stair stepping its way down limestone ledges, and deeper slow moving holes. But winter rains bring high water and plenty of current. Adjustments must be made in order to have the best shot of putting a musky in the bag. Boat positioning becomes key on any river this time of year. A good, strong trolling motor can keep you in the target zone longer, by at times an anchor is the only way to keep your boat in the strike zone.

The "strike zone" becomes smaller with cold, high water levels. Unlike summer and fall, muskie will rarely be found in deep, fast running water. Muskie will feed actively in even the coldest water, and air temperatures. Some adjustments are required to optimize your chances. Here are some musky fishing tips that will surely help you bag that trophy fish in the coldest of months on the Collins river.

First, forget about that high speed cranking bucktails and minnow baits. Slow is the word now. How slow you ask? And why? A musky's metabolism slows in cold water but the fish still have to eat. The fish tend to move less, opting to wait around cover, saving energy, while waiting for an easy meal to swim close enough to become dinner. Knowing this is a key factor in your success or failure. Where are these river fish hiding and what technique is likely to work?! An offering that stays in the strike zone! If water levels are up and moving fast, you can practically eliminate three quarters of water. By that I mean concentrated your efforts on current breaks. Breaks on steep, sloping banks, log jams, weed beds and deep bluffs are where you want to be. And of course, creek mouths. These cold river fish will not be in strong cold current. Instead, muskies will be tight to the bank, or to cover that offers a current break.

I mentioned creek mouths and can assure you that the musky will be there. When you find creeks running dingy water that meets a slightly clearer flowing river, you've found the spot on the spot! These areas should be hit often during your day on the water. They hold multiple fish. The key is timing, and sometimes some out of the box strategy. For example, on a cold winter day in January, I was able to boat 3 muskies, in as many casts using a jig/plastic combo. My partners were tossing gliders and suspended minnows with no action. I tied on my jig combo and began quick jerks, followed by long pauses in the murky creek mouth. The hits were subtle but it became obvious the muskie were turned on by an "in your face" approach. I believe the pause was the key. Slowing down can be the difference in great action or an empty net.

And just because the fish are cold doesn't mean the hits are slow nibbles. Let me tell you when a musky is ready to actively feed and your lure is the target you'd better be ready! Solid, jarring strikes can be expected in high, cold water. These awesome moments are what musky fishing memories are made of. A musky can reach burst speeds of 30 mph. A steady hand and paying attention to every move of your lure is critical.

A common mistake I see anglers make are too long cast and not paying close attention to lure speed in fast water. If you fish with a partner and want to increase your odds of a hookup, I suggest taking turns "short casting " in tight on the banks that are holding the fish. Short casts allow you to really pick apart an area of slow moving water. Look for anything that breaks the current and you will most likely be in business, sooner or later. Don't waste time in the swift water. Work a lure slightly up stream on short casts and repeat in the same spot or area. Another plus when short casting is hook up percentage. Using 80 # braid , its you against the fish on short line which gives you the advantage. A good solid hook set is half the battle and the shorter the distance, the more power the angler has.

Lures to consider are glide baits that have a slow fall and offer a good hang time. Twitching suspended minnow lures are great throw back lures and can be worked in tight on the bank, allowing the fish extra time to see the lure. Paddle tail soft plastics can be deadly in cold water. If the musky aren't moving on the big ones, ill switch to a 4 or 5 inch version and work with a slow rise sink retrieve. A jig/minnow combo is a must for pitching in tight cover, especially when the fish are hanging near current on soft, mud banks. I put plastic behind my jig for a trailer but anytime you can add a nice 4 to 5 inch live minnow behind a jig, do it!

As water temps fall to the lower 40's and below, be prepared to fish slow and work those slack water areas with focus. Remember, its more of a hunt than anything in cold conditions.

The best musky fishing of the year is here, if you dare to venture out on the scenic Collins river. More to come!

Improve your fishing skills with my Muskie Fishing Videos

I hope you had a Merry Christmas. Happy New Musky Fishing Year!