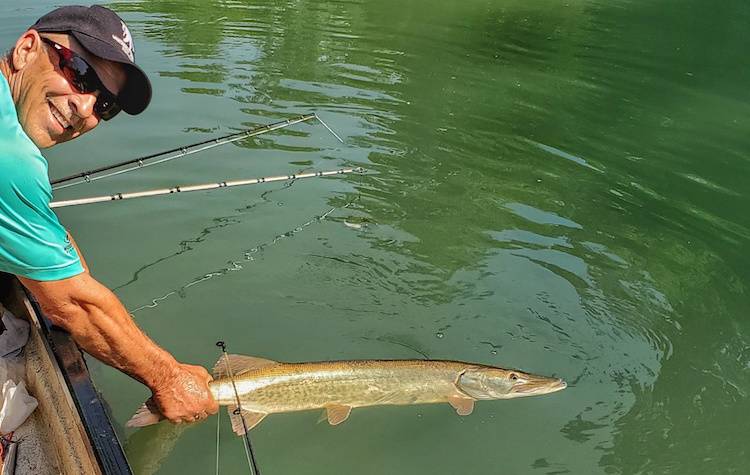 Up in the northern country the start of muskie fishing has started as the ice has melted and a new season is underway. Northern anglers have endured another 6 months of cabin fever. In most cases water temperatures will not be a factor up north when it comes to a healthy release of a muskie. Sure, it gets hot on northern lakes and muskie fishermen (most) will consider water and air temperatures as they plan a muskie hunt.

But here in the south, water and air temperatures must be taken seriously by anglers who chase the mighty muskie. Beginning around the end of June and lasting until mid September, surface temperatures can reach 85 degrees or warmer on southern reservoirs. Add to that hot, humid air temperatures and you have a recipe for disaster when it comes to safely releasing a muskie. This time frame is what I like to call "A.C. fever". It's the reverse of cabin fever when ice fishing, muskie shows, and lure making are common ways to scratch the itch until muskie season opens.

Muskie season is open year around in the south but the smart, conservative minded angler will seriously consider taking a break from muskie fishing during the hot months of summer. Is the fishing good in the hot months? Absolutely! Early morning and late evening top water explosive action, double 10's and big rubber will produce. Night fishing is also an option on most southern waters.

What's a man to do? It's open season, the muskie feed often and water temperatures feel like a warm bath. The air is thick and hot. It's time to know when to say when.

You see, there are other factors to consider when fishing muskies in border line hot conditions. From the catch to the release, caution has to be taken to give your fish the best chance for survival. So you've got her in the net but she rolled like a gator and twisted nine treble hooks tightly into the netting. You dont have much time to diagnose the problem. Long nose pliers and strong hook cutters are a must at this point. Quick action has to be taken to get your fish unwrapped and upright in the net. She needs to rest after this operation, not be photographed! Remember, air temperatures are hot! Water surface temps are warm. Was the fish able to be in the water during the operation? The rule is not to keep a muskie out of the water any longer than you can hold your breath. Over time ( trail & error) I have come to disagree with this notion in part. Some folks I know can hold there breath under water for two minutes or longer! Each second of the inability to breath oxygen through a muskies gills are critical. Add to that, warm water and hot air. Most likely, the fish you caught came from a much cooler water column and is now soaking up twenty degree warmer water on the surface after the battle. Yes, time is critical.

We've all made our mistakes and learned (hopefully) from them when it comes to how to release a hooked muskie. Deciding when it's just too hot to subject our quarry to life threatening conditions comes from the heart, and experience. True muskie nuts are among the most conservative minded anglers on the planet. When it comes to considering warm southern waters and sizzling heat, I'd like to think that most of my fellow anglers not only give the muskies a break, they teach newcomers to the sport the importance of this issue. Put your trophy on hold for a couple months. Fish for bass, catfish, striper, etc. Take a late summer trip to the north and chase a trophy muskie. Restock your muskie baits and get ready for fall and winter muskie fishing. Stay informed and know your water and air temperatures on area lakes when summer heats up. It's not that hard to know when to say when!

Too hot for muskie fishing?

There are plenty of other fish to catch!

﻿In The Spread is one of the world's premier sport fishing video companies and educational outlets for demonstration, explanation and insight on how to catch fish. Get inside access to our video library by becoming a member.